Recap of BRITNEY SPEARS: PIECE OF ME TOUR Live in Manila 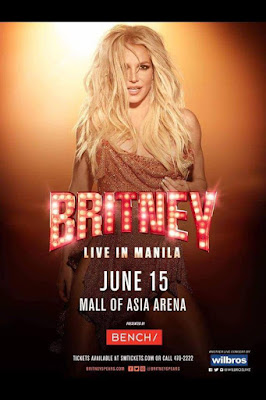 During the late 1990s, a couple of girl Mouseketeers from the Mickey Mouse Club graduated into full-fledged pop stars. One was more known for her strong voice -- Christina Aguilera. We have seen Christina live in concert in Manila before and were indeed bowled over with her amazing vocal range. The other one is more known for her controversial image -- Britney Spears. She had never been to Manila ever, until this year. Therefore, this "Piece of Me" concert tour of hers (her Las Vegas residency concert) at the MOA Arena was all sold out within the first day of ticket sales.

When I bought our tickets in the second week, the Gen Ad seats were almost sold out except for sections 504 and 515. I bought them even though I was told that this was already beside the stage. When we went to the MOA Arena, it turns out both 515 and 516 on one side (and 504 and 505 across it) were really not good because the view of the stage was significantly obstructed by the lights and sound systems. We also could not see the LED backdrop properly, nor the big screens beside the stage. Next time, if there was a choice, I would probably pass on watching a show in those sections, unless of course, I desperately want to see the artist. 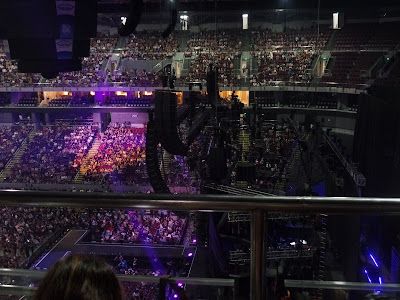 Our terrible view of the stage
Should they really sell these seats at regular price?

The concert began very energetically, with the song "Work Bitch" (#12, 2013) in which Britney Spears (in her big blond shaggy hairdo and gold and glittery costume) and her dancers set the pace for the rest of the show. This was followed by one of her Number 1 songs "Womanizer" (#1, 2008) then quickly followed by "Piece of Me" (#18, 2007, the title song of the tour in which she famously mentioned the Philippines in the lyrics.)

The next segment began with the dancers wearing black capes and waving them like wings, with the backdrop of bats flying. Then Britney appeared in red, unexpectedly singing her very first Number 1 song, "...Baby One More Time" (#1, 1998)! She then followed this with another one of her early hits "Ooops! I Did It Again" (#9, 2000). Actually, for me, these were the songs I most wanted to hear, so I was already very happy even at that point. (CLICK TO WATCH VIDEO) 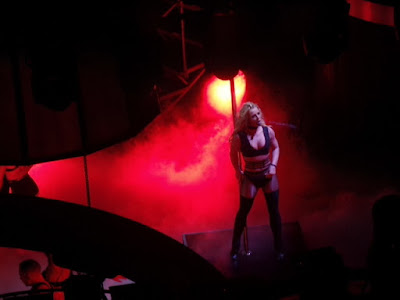 For "I'm a Slave 4 U" (#27, 2001), she had a pole onstage, but she just walked and sashayed around it, and did not really get up on it. (CLICK TO WATCH VIDEO) For "Freakshow", they got someone from the audience to be walked on all fours by Britney, but they picked some Caucasian guy from Hawaii for this part, not a Filipino guy. She displayed some of her hiphop moves to some Missy Elliot hits like "Work It" and "Get Ur Freak On."

Throughout all of this strenuous dancing, I don't remember hearing Britney gasping for breath when she "sang". I guess it is most probably true that she was lip-syncing her songs. However that did not really matter that much to her hardcore fans because her dance showmanship was absolutely riveting. Anyhow, we did hear her real voice. When she greeted the audience once in a while, her voice was unexpectedly shrill and high-pitched. 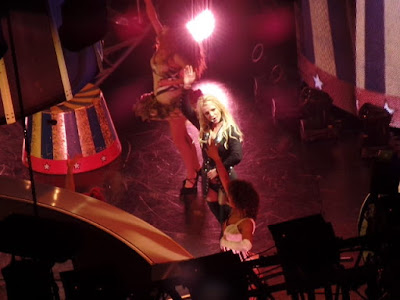 Britney and her circus props

In the final suite, Britney began to sing a slowed down version of "Toxic" (#9, 2004) to the excitement of the crowd, which eventually sped up to the upbeat version we were all familiar with. This was followed by "Stronger" (#11, 2000) then "(You Drive Me) Crazy" (#10, 1999), a sequence which got everyone up on their feet. (CLICK TO WATCH VIDEO) She acknowledged her dancers and her band, took her bows and left the stage to loud clamors of an encore.

Of course, she came back out again to the engage the crowd one last time with "Till the World Ends" (#3, 2011, CLICK TO WATCH VIDEO). After she danced through the confetti and said her goodbyes, the house lights were turned on and the concert was over. Because of our terrible seats, we could not fully enjoy the show as we would have in better located seats. The sound quality in our area was also not good. There were some songs I was waiting for, but did not hear, like "Sometimes," "Everytime" and "Lucky" (which a group of fans sang in the lobby after the show, probably in disappointment).