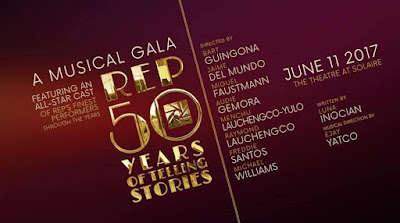 Tonight, Repertory Philippines (REP) staged a musical gala show in celebration of their 50th anniversary of existence. I had been a long time fan and supporter of REP since their days at the William J. Shaw Theater at the Shangri-La Mall in the 1990s. More recently, I watched and reviewed almost all their shows in the last five years at least when they were already playing in Onstage in Greenbelt 1 Makati.

I had a personal close encounter with REP a few years back when our department availed of a Rep Showstoppers package to celebrate World Voice Day back maybe 10 years ago. I got to sing a duet of "Lily's Eyes" (from "The Secret Garden") with then Rep actor, now Red Turnip pioneer Rem Zamora. Because of this, I also actually had a chance to sing in front of Ms. Baby Barredo herself! The other Rep members I met and interacted with that time were Karla Gutierrez, Cathy Asanza, Felix Rivera, Jack Salud, JM Rodriguez, Liesl Batucan and Menchu Lauchengco-Yulo.

I knew I had to be there to witness this historic event so I promptly purchased a couple of tickets for me and my wife to ensure that we will be there at the Theater at Solaire for this occasion. Last month, I tried my luck on an online promo by Theater Fans of Manila who asked to post four three favorite Rep shows on FB. Luckily, I was one of the winners, so I was able to bring a couple of our kids with us to watch this special show. The FB post that won me those two tickets was the following:

The three the most memorable Rep shows that I had seen were:
1. Les Miserables (1993) - It was the grandest local production of a Broadway hit show that I had ever seen, with an amazing all-Filipino cast (including Cocoy Laurel and Menchu Lauchengco) That majestic revolving barricade scene was unforgettable.
2. Portrait of the Artist as Filipino (2009) - Old pre-war Manila charmingly came alive on stage in this nostalgic piece by Nick Joaquin about the Marasigan sisters (played by Ana Abad Santos and Liesl Batucan).
3. The Producers (2013) - Perfectly encapsulated Rep's impeccable mastery of the musical comedy genre. This was a hilariously outrageous show featuring the triple threat talents of Topper Fabregas and Audie L Gemora.

The concert began promptly at 8 pm with a welcome speech by REP President and CEO, Mindy Barredo-Perez Rubio. She proudly shared that this show is the 444th production ever staged by REP. She confessed that she was disappointed when REP only won one award during the last Gawad Buhay awards last May. However, her sister Baby Barredo and Joy Virata quickly cheered her up by making her realize that all the other winners were actually from Rep, and they were right.

The show began with a Prologue, dubbed "50 Years of Telling Stories" directed by Jaime del Mundo and choreographed by Dexter Santos. With the song "Why We Tell the Story" (from "Once on this Island") behind them, Rep veterans Joy Virata, Noel Trinidad, EJ Villacorta, Enchang Kaimo and Celia Diaz Laurel tell the audience about the mission of Repetory Philippines to tell stories via stage performance. 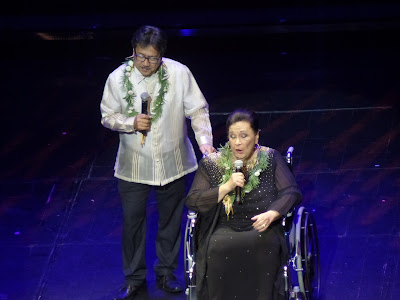 Suite 1 was entitled "The Dreamers," directed by Miguel Faustmann. Of the five founders of REP, Baby Barredo and Leo Martinez took the stage last night to recount their early stories. They, and other Rep veterans like Jorge Ortoll and Anton Juan, took us back to the very beginning in 1967 when REP staged a production of Strinberg's "Miss Julie" in Filipino in front of an audience of seven, with cast and crew unpaid. Songs sung during this segment were "The Impossible Dream" (sung by Audie Gemora and Michael Williams), and a grand production number of "Tradition" (from Bibot Amador's favorite musical, "Fiddler on the Roof").

Suite 2 was entitled "The Tellers," directed by Audie Gemora. This was about the actors, how they should not only be able to act, but also sing and dance, or a least act like they know how to sing and dance. Several song and dance numbers were featured here, like "I Hope I Get It" (from "A Chorus Line"), "America" (from "West Side Story"), "Camp Rock" (with Morissette and Markki Stroem) and an elegant ballet pas de deux to the tune of "If I Loved You" (from "Carousel"). This concluded with a catchy jazzy production number "One" (also from "A Chorus Line"). (CLICK TO WATCH VIDEO) 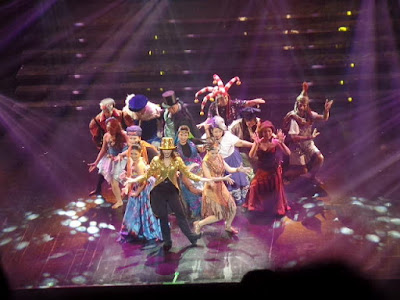 "Magic to Do" with Menchu Lauchengo-Yulo and the ensemble

After a 15-minute intermission, Suite 3 began, entitled "The Artisans: The Creatives" directed by Raymond Lauchengco. Ms. Menchu Lauchengco-Yulo paid tribute to all the Lighting Designers, Costume Designers and Set Designers who have worked with Rep, and their invaluable contributions in making the magic come alive on stage with their artistry. Ms. Menchu then led the ensemble in singing the song that permeated through this whole segment of the show -- "Magic to Do" (from "Pippin"). (CLICK TO WATCH VIDEO)

Suite 4 was entitled "The Hands: The Unsung Heroes", directed, written and directed by Freddie Santos. This part paid tribute to the unseen stage manager and the rest of backstage crew, the original men in black. Pinky Amador and Jeremy Domingo led a team to act out what happens backstage during a stage production. There was a recurrent joke about an annoying sound while the show was going on. Later, Santos confessed that he was once guilty of ripping paper for confetti for a show and it was heard throughout the auditorium. The segment ended with Mitch Valdez singing and dancing "Comedy Tonight" (from "A Funny Thing Happened on the Way to the Forum") with four guys. 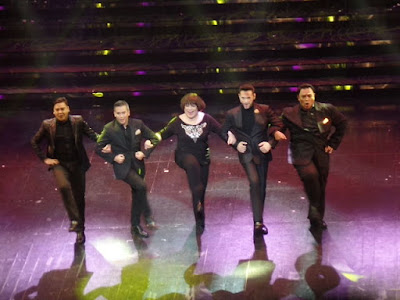 "Comedy Tonight" with Mitch Valdez and her escorts

Suite 5 was entitled "The Interpreters: The Directors" directed by Michael Williams. This segment was narrated by Bart Guingona, swathed in a sea of rays of golden light. The tribute to the past and present directors of REP was punctuated by a moving rendition of "Finishing the Hat" (from "Sunday in the Park with George") sung by Guingona, with snippets of other dramatic songs sung in counterpoint by six ladies all wearing elegant gowns in bright primary colors.  Carla Guevara Laforteza (in yellow) and Caisa Borromeo (in red) sang "I Wanna Make Magic" (from "Fame"), Cathy Azanza-Dy (in periwinkle) and Sheila Francisco (in teal) sang "I Can See It" (from "Fantastiks"), while Pinky Amador (in fuchsia) and Morissette Amon (in green) sang "This Is The Moment" (from "Jekyll & Hyde")..

This was followed by an "In Memoriam" segment introduced by Topper Fabregas, and accompanied by a haunting duet entitled "Some Things are Meant to Be" (from "Little Women") sung beautifully by Liesl Batucan and Becca Coates. The tribute list began with Ms. Zeneida "Bibot" Amador, followed by personalities both on and behind the stage. It ended with the recent departures of beloved Rep messenger Danilo Mirasol and singer/actor Eugene Villaluz. (CLICK TO PLAY VIDEO) 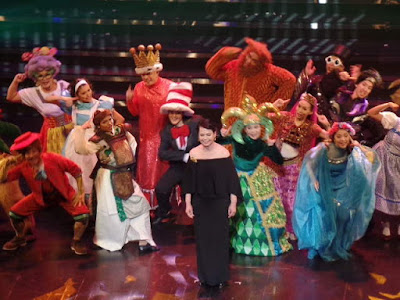 Joy Virata and the colorful RTYA gang of characters

Suite 6 was entitled "Storytelling Realized" about the Repertory Theater for Young Audiences, directed by Menchu Lauchengco-Yulo. This segment was lovingly narrated by none other than the indefatigable founder, heart and soul of RTYA, Ms. Joy Virata. She then led an animated ensemble dressed in colorful costumes from past RTYA shows for the song "Oh, the Thinks You Can Think!" (from "Seussical").

The seventh and final suite was entitled "REP Rising". This segment began with a stirring solo number by long-missed Rep favorite Monique Wilson, singing "The Story Goes On" (from "Baby"). Young Jillian Ita-as joined Ms. Wilson in the second verse to bring the song on a high note. (CLICK TO WATCH VIDEO).

Then all the performers from the whole show gathered on centerstage to render the ever-show-stopping "One Day More" (from "Les Miserables"). It was great to see the original cast led by Cocoy Laurel, Gemora, Wilson, Williams, Zamora, Faustmann and Virata sing the first verses, then symbolically giving way to a newer generation of performers including Joaquin Valdez, Red Nuestro, Becca Coates, Caisa Borromeo, and Myke Salomon. The audience was up on their feet with a deservedly long and rousing ovation to congratulate cast and crew for a show well done. (CLICK TO WATCH VIDEO)

The whole evening concluded with a rendition of the new REP Anthem "Come Home to Rep" written by  EJ Yatco. This song was sung by all the directors of the show Santos, del Mundo, Faustmann, Gemora, the Lauchengco siblings and Williams. I was very happy to have seen Repertory Philippines bask in their golden glory tonight. Kudos to overall stage director Guingona, head writer Luna Grino Inocian, musical director Yatco, all the segment directors and stage manager, the entire cast of talents and crew. I look forward to seeing them tell more stories in the years to come.