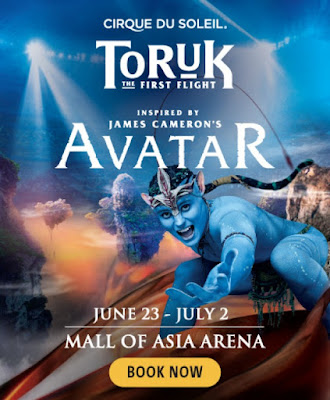 Cirque du Soleil is an artistic organization based in Quebec staging grand shows of acrobatic excellence to countries all over the world since its inception in 1984. The first Cirque show ever staged in Manila was back in June 2011 with "Varekai" which was held in a special tent set-up in Rizal Park. After that, the next Cirque show was "Saltimbanco" in August 2012, which was held in the then brand new SM Mall of Asia Arena.

This year, Cirque du Soleil once again returns to the MOA Arena with their latest successful touring show called "Toruk - the First Flight" which was inspired by one of the biggest box-office hit movies of all time, "Avatar" by James Cameron. Cirque developed this show (their 37th production) in 2015, and it has been touring the USA and the world ever since. This Manila run from June 23 to July 2 is the Asian premiere of this show. 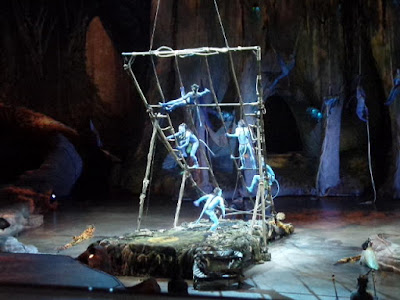 "Toruk" is set in the planet of Pandora, inhabited by the blue, tailed beings called the Na'vi. It tells the tale of two Na'vi boys Ralu and Entu, brothers in heart, who bravely go on a dangerous quest all over the planet to gather five essential talismans needed to tame and ride the much-feared giant flying dragon called the Toruk, a creature which can save the planet Pandora from being totally destroyed by an impending cataclysmic disaster.

In the MOA Arena, the whole orchestra section had been covered in black, with twinkling lights playing like fireflies. The audience area bathed in blue light. By the start of the show, this huge black covering will be peeled off to reveal the more vibrant world underneath. This is one of those shows where the higher rows of seats on either right and left sides may have a better panoramic bird's eye view of the whole performance area. Where we were seated in the front rows of the center section, there were obstructed views to certain scenes. 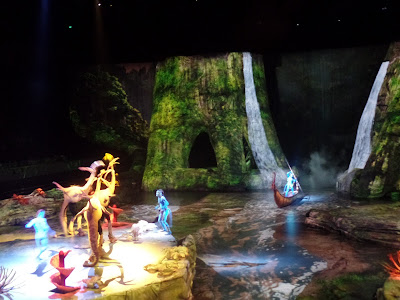 Illusion of a Flowing River

Act I boasts of spectacular acrobatic numbers involving trampolines, ropes, and hammocks of cloth on which the performers would execute stunts of remarkable strength and agility. There are inventively executed full-sized animal puppets, gardens of vividly colorful plants, various land forms (like cliffs and volcanoes) and water forms (like waterfalls and rivers) underneath, thanks to the realistic illusion of lights and graphic projections.

My most favorite sequence of all is the most elegant performance atop a skeleton of a massive beast where the acrobats did their breathtaking stunts with utmost grace and balance. This whole segment about the third talisman (right before the 20 minute intermission) was a beautiful non-stop series of one photogenic scene after the other. I was in complete awe while watching this incredibly riveting number. 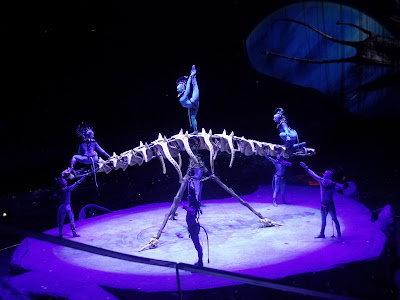 Balancing on a Rotating "Skeleton"


Act 2 began with some thunder rumbling, with the lightning flashes coming from the cellphones of people in the audience who had downloaded the Toruk interactive app. Compared to Act 1, Act 2 seemed to have less spectacular stunts, with climbing poles, throwing boomerangs, flying kites, crossing a net bridge. The main highlight of Act 2 of course is the actual grand appearance of titular Toruk itself in all its bright orange glory. How they gave the giant dragon-like creature Toruk the illusion of flight was very imaginative, especially as it even had one Na'vi boy riding on it.

Because of the strange Na'vi names and the unintelligible invented language the characters spoke, you'd have to rely on the English narration to fully understand the flow of the story. Some may feel that the slow pace of story development, along with the unfamiliar instrumental musical score and ethereal songs (by the Shaman character), may lull them at times. But not to worry about falling asleep though, as there is a new death-defying stunt would immediately snap you back to attention at every turn. 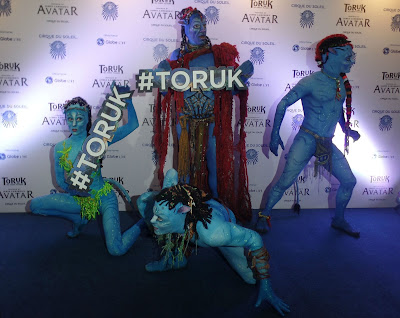 Lead Characters Pose in the Lobby

This is the very first Cirque du Soleil show I had ever watched live. I can see why these shows are very popular. The art design of the whole spread of the stage is a lavish visual feast. You could hardly keep your eyes on one thing as there were so many interesting things happening at the same time at different sections of the expansive performance area. There is enough hyper and psychedelic multi-sensory stimulation here to keep everyone, young and old, fascinated, happy and entertained.