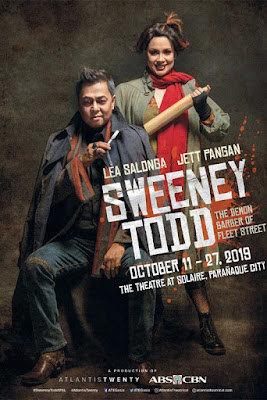 I had known the music and songs of Stephen Sondheim's 1979 Tony and Olivier Award winning musical "Sweeney Todd: The Demon Barber of Fleet Street" since the 1980s since I was lent a copy of the original cast recording on CD featuring Len Cariou as Sweeney Todd and Angela Lansbury as Mrs. Lovett. Its darkly humorous plot involved a barber coming back home to London after 15 years of exile to avenge the loss of his family. However, at that time, I only imagined the macabre scenes in my head while listening to the songs and their grisly lyrics.

It was only in 2008 that I saw everything come together in Tim Burton's film version of Sweeney Todd (MY REVIEW) starring Johnny Depp and Helena Bonham Carter. The next year 2009, the dream of seeing this musical live onstage finally came true when Repertory Philippines staged it (MY REVIEW), with local theater royalty Audie Gemora and Menchu Lauchengco-Yulo in the lead roles. Both of these versions, I liked a lot.

This 2019, for their 20th year anniversary, Atlantis Theatrical has come up with its own stage interpretation of  "Sweeney Todd" with no less than international star Lea Salonga as Mrs. Lovett, with Jett Pangan as Sweeney Todd. Everything about this was grand. The venue was at the high-tech Theater at Solaire. The live music in the pit was to be rendered by the ABS-CBN Philharmonic Orchestra conducted by Gerard Salonga.

Director Bobby Garcia's unique concept for this iteration of the show is the first thing you see on stage even before the play begins. Mrs. Lovett's pie shop along Fleet Street had been transported by set designer David Gallo into a junkyard for rotting automobiles, located right beside the Fogg's Asylum for the mentally deranged. Sweeney Todd and Mrs. Lovett's grand entrance during the first song was via a long red vintage car with beautifully-lit interiors (by lighting designer Aaron Porter).

Since the time setting had been moved from the 19th century into an uncertain period of economic decline, which can either be current or even future, the costumes of Rajo Laurel had likewise shifted from the former Victorian-era fashion sense to a lesser-defined eccentric modern fusion ensembles, a stylish "Mad Max". The hair and make-up designs of Leslie Espinosa followed accordingly in the same goth and punk styles. These style choices are apparent in the publicity posters showing Salonga and Pangan in full costume.

Lea Salonga brought a delightful wickedness in her energetic interpretation of slatternly, twisted but astute businesswoman Mrs. Lovett. Every word of Lovett's motor-mouth chatterbox songs were so clearly enunciated. Not a single note of those complex distinctly-Sondheim melodies went astray with her. It was a topnotch performance that was above and beyond everyone else on that stage that night, a true national treasure.

Jet Pangan hit all his low and high notes squarely, matching Salonga note for note in their songs together. However, his Sweeney Todd seemed to be too sane and phlegmatic to be  a cold-blooded killer. The dangerous tension he should have generated in those shaving scenes felt lacking. Perhaps because his acting was too restrained or too subtle, or maybe his costume and make-up looked too regular? Pangan was still able to hold the central role together solidly nevertheless in a most compelling.

Andrew Fernando got the deep operatic baritone all fit for his role as Judge Turpin, but despite his bodily heft, his stage presence felt like he was not strong enough of a threat to match Todd's wrath, nor lustful enough a lover to desire Johanna for himself. Gerald Santos and Mikkie Bradshaw-Volante sounded beautiful singing together as Anthony and Johanna. However, they did not generate any sense of romantic chemistry between them. Johanna's ugly blonde wig and drab plain dress also did not do her any favors.

Luigi Quesada was a joy to watch as Tobias Ragg, as he hustled gleefully from being the harassed assistant to Pirelli, then Mrs. Lovett's. By the time his youthful sensibilities got hit by a strong mind-blowing jolt, he had the whole audience wanting to provide him the comfort he so desperately needed. With his naturally flashy stage fluorish, Nyoy Volante is consistently a joy to watch. Even in a jerk conman role as Adolfo Pirelli, the audience loves him and lapped up his antics. Arman Ferrer, mostly known for his soaring tenor vocals, had some pretty funny moments as the Beadle Bramford and his "Parlour Songs."

In the 2009 Rep production, the set (by Gino Gonzales) featured an ingenious contraption in which Sweeney Todd's latest victim in his tonsorial chair upstairs would slide down into Mrs. Lovett's pie kitchen below where she had a fiery oven ready. In this Atlantis production, there was no clear barber shop, nor a clear pie shop. The barber's chair (actually just an office chair) was just on a stage at the posterior part of Sweeney's car. After Todd sliced the neck of a customer, the "corpse" would simply stand up and walk into Mrs. Lovett's oven waiting on stage right, and come out carrying a pie made of his meat. This change was such a major departure from the original which may be hard to accept for purists.

Even though it was already on its second weekend, there were still some sound glitches heard during the show last night. There was one moment of a prolonged feedback noise, which thankfully they were able to control promptly. The most unfortunate glitch for me was during the quartet number "Kiss Me (Part 2)" in which the voices of the Judge and Beadle were barely heard at all, ruining one of my awaited moments of the show.

Despite these petty little issues and comparisons to previously seen versions, it was still the Sondheim music and songs and the incomparable musical talents of Filipino artists which held my rapt attention for the nearly three hours running time. The risky directorial choice made by Bobby Garcia to change the time setting was certainly bold and unprecedented. It was jarring, yes, at first. But ultimately, his audacious vision served to distinguish this production from all others before it with its singularly stunning theatrical style, in which strut assembly and hacksaw have replaced the rolling pin and butcher knife.