Review of Rep's THE QUEST FOR THE ADARNA: Enjoying an Ethnic Epic 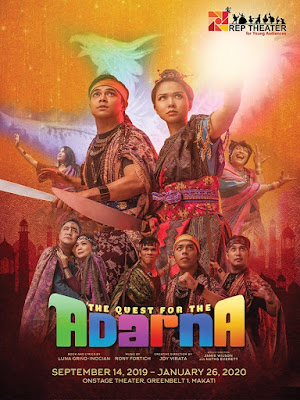 King Fernando and his wife Queen Valeriana ruled the Kingdom of Berbania. They have 3 sons: Don Pedro, Don Diego and Don Juan. One night, King Fernando had a nightmare of Don Juan being murdered, and he became very ill that he did not even want to eat or rest. None of the doctors were able to cure the King. An old native healer advised that the Ibong Adarna was the only creature which could restore his health by its restorative singing. So the princes set out to Mt. Tabor to try to capture the mythical bird so she could sing for the healing of their father.

Every Filipino school child should know about the Ibong Adarna as this epic was required reading in their Filipino class. There had been two LVN movies about the bird, first in 1941 (by Vicente Salumbides, starring Fred Cortez) and a second in 1956 (by Manuel Conde, starring Nestor de Villa and Nida Blanca). In 1972, there was a comedy version starring Dolphy, which most Gen Xers would remember from their childhood. It would be best to forget that ill-advised 2014 indie film (by Jun Urbano, starring Rocco Nacino) that was an insult to the original. Gantimpala Theater Foundation has a stage version in Filipino written by Ed Maranan, which it has been showing regularly since 2010.

This year, Repertory Philippines stepped out of its usual box of foreign stage adaptations of foreign fairy tales by commissioning a new, completely original musical about the all-Filipino epic Ibong Adarna for its yearly Rep Theater for Young Audiences program, which is now on its 27th year of providing theater experiences for school children.

Luna Grino-Inocian, who had previously adapted for the Trumpets two C.S. Lewis fantasy classics -- "The Lion, the Witch and the Wardrobe" in 1997 and "The Horse and his Boy" in 2015 -- was an inspired choice to write this English adaptation of the Adarna story for children for Rep. The music was by Rony Fortich, in his first production with Rep, and his second musical about a bird -- the first being "The Bluebird of Happiness" in 2013 which was adapted from a Belgian play by Jaime del Mundo, also for Trumpets. 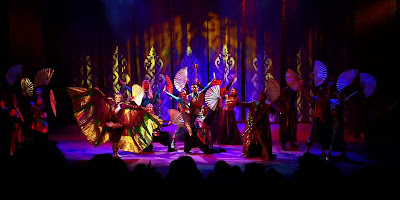 The fancy and colorful set and costumes of this show

In the Thursday 1:30 pm afternoon show I watched, the Adarna bird was played by Carla Guevara-Laforteza. She was in  all fairy-like diva mode in that armored body suit and colorful flowing wings, sitting on that pedestal that represented her tree or on that suspended swing. Her voice was of course of ethereal soprano quality as the role demanded. (Shiela Valderrama-Martinez, Cara Barredo and Andrea Monique Alvarado alternate as Adarna.)

The lead character of Prince Juan was played by Diego Aranda. He had that good boy-next-door vibe that fit the role well, even as he evolved into hero later in the play. He also had an effective chemistry with Alex Reyes who played the spunky Maria Blanca. This strong empowered princess was a lesser-known character, and it is good that Grino-Inocian made her into a major character here, albeit without the complicated love triangle subplot from the original epic. (Neo Rivera and Leo John Guinid alternate as Prince Juan. Justine Nicolas, Jillian Ita-as and Cara Barredo alternate as Maria Blanca.) 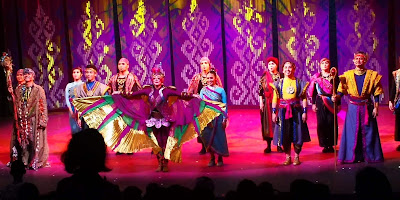 The technical designers and crew had their work cut out with the huge challenge of staging a story that involved adventure and magic to meet the demanding standards of today's tech-savvy children. Very important in this aspect was the fluid stage design of Joey Mendoza, the colorful fusion-type costumes of Tata Tuviera with hair and makeup by Ely Maalat, the critically vital lighting design of John Batalla and the rousing choreography of PJ Rebullida. There was variation in techniques -- from shadow play, puppetry to ballet dancing -- to spice up the story-telling for the kids.

When it came alive on stage under the direction of Joy Virata (with co-directors Jamie Wilson and Naths Everett), this original Grino-Inocian and Fortich collaboration hit all the right spots, fitting right into the Rep formula for its children shows. All the energetic performances of the cast, the delightful songs (from upbeat to ballads to rap!), the wacky juvenile humor and kiddie interactions ("Kids, help Prince Juan remember the steps on how to capture the Adarna!"), the magical stage effects (the petrifying poop! the 7-headed monster!), and of course, that all-important moral lesson at the end.


THE QUEST FOR THE ADARNA runs from September 14, 2019 to January 26, 2020 with multiple showtimes (10 am, 1:30 pm and 4 pm) throughout the week. You can check out the schedules on the Ticketworld site. Tickets are very reasonably priced at P800 for Orchestra Center (reserved seating), P600 for Orchestra Sides and P500 for the Balcony.