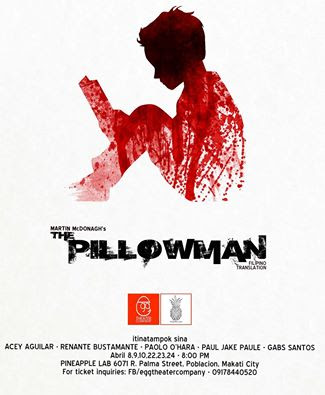 I have been reading theater buffs and actors rave about this play called "Pillowman". Filipinos got a taste of how good it was back in 2014 when Sandbox Theater Collective staged a reading in PETA. I was out of town that Halloween week so I failed to catch that performance. This year, Egg Theater Company actually stages the full show for the first time in Filipino language.

I first heard of the Egg Theater Company last year when it had its maiden outing called "Maniacal" to excellent reviews. Unfortunately, I had not been fortunate to watch any of its limited runs. This new company is composed to theater artists Kristine Balmes, Renante Bustamante, Martha Comia, George de Jesus III, Mara Marasigan, Paolo O'Hara and Alvin Trono. Its vision is to produce contemporary adaptations of various straight plays translated into the Filipino language.

The play is about Katurian, a young writer who had written some stories about gruesome murders involving children. Tupolski and Ariel, policemen investigating a couple of real-life child murders noted details disturbingly like how Katurian described them in his stories. They pick up Katurian for questioning, but he was not confessing to anything. Katurian's cognitively-impaired brother Michal was brought in to pressure Katurian even more. 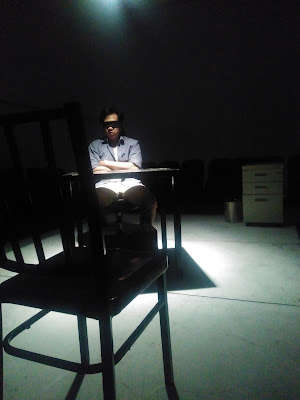 The theater space in the Pineapple Lab is a confined rectangular room. There was a small white stage in the middle of the room, with two rows of chairs all around for the audience. We see the actors and all the action up close. The walls will also be used to show eerie artwork about Katurian's sick stories, including the titular Pillowman. (Joee Mejias was responsible for the these projected drawings, as well as the haunting musical score.)

This was not an easy play to watch. The very topic of child killings alone is already dark and disturbing in itself. Listening to those macabre stories with innocent-sounding titles like "The Little Apple Men" or "The Tale of the Town on the River" were just sickening! This was compounded further by more grim topics of mental retardation and police brutality. The room was claustrophobic. The action was very physically intense and violent. You feel like you are inside that interrogation room yourself witnessing torture and murder. These were the stuff of which many nightmares are made. 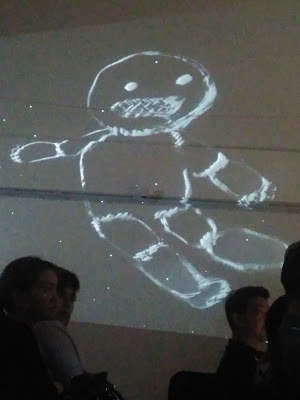 The Pillowman on the Wall

The actors performed like a seamless ensemble. Everyone was invested very seriously in his respective roles, so that they seemed to be the actual characters, not actors. Gabs Santos knew he had the whole play on his shoulders as Katurian and he gives a solid electrifying central performance. Renante Bustamante (as "good cop" Tupolski) and Acey Aguilar (as "bad cop" Ariel) complemented each other perfectly as the sarcastic and sadistic investigators. Paul Jake Paule believably had the childlike innocence of deranged man-child Michal right there in his big round eyes. His line delivery was chillingly realistic.

Kudos to Mr. George de Jesus III, who was responsible for directing this show, as well as translating Martin McDonagh's controversial material into vivid Filipino. I am not sure about the original English text, but this Filipino text had some sense of humor in it, which was welcome considering the gravity of the dire topics. The play is long, with a running time of 2 hours and 40 minutes, but the way de Jesus told the story with the effective ensemble acting kept the audience riveted to every word, diabolical as they were. This is hardcore stuff, not for the faint of heart.

"The Pillowman" had shows last April 8 -10, and will play for one more weekend from April 22-24 at 8 pm. The venue is at Pineapple Lab, located on 6071 R. Palma Street, Poblacion, Makati, near Powerplant Mall in Rockwell.  For ticket inquiries, contact 09178440520 or check out the FB page of Egg Theater Company.