Recap of the TDR of COMPANY CALL: ATENEO BLUE REP @25 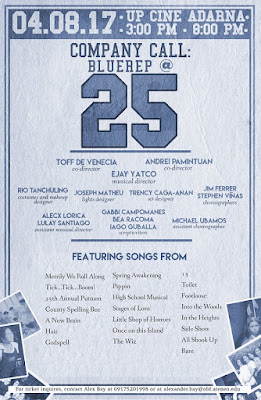 Honestly I am not sure I had ever seen a production of Ateneo Blue Repertory (or blueREP for short). (I recall watching a production of "Suessical" in Ateneo many years back, but unsure if that was blueREP or not.) Anyhow, because this theater company is celebrating its 25th anniversary this year via a reunion concert, I thought it would be very interesting to go watch, in order to see how they put up a show and who among the current crop of actors were blueREP members once upon a time.

Two anniversary concerts were supposed to have been staged today, April 8, 2017 at the Cine Adarna, UP Film Institute in UP Diliman. However, yesterday after, there was an announcement that the 3 pm show had been cancelled due to "unforeseen circumstances and technical difficulties." There will only be one show left, the 8 pm show, which I could not watch. However, I found out from a friend that they are opening the technical dress rehearsal (or TDR) that afternoon to the public. Thankful for this chance, I rushed over after work and reached the venue before the TDR started about 4 pm. 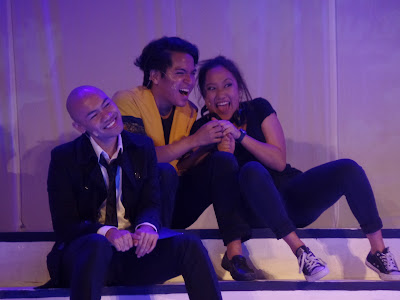 AM, Mia and future AM

The show proper had a unifying story (script by Gabbi Campomanes and her team) upon which the retrospective of past productions will be organized around. It involved AM and Mia, a couple of blueREP staff members who only had a few minutes before open house for their 25th Anniversary. They stumbled upon a magical production book which sang songs from old blueREP shows when you flip its pages. When they fight over the book, this causes all the pages inside to fall and scatter out and disappear.

An mysterious bald man in black appears before AM and Mia and told them that he had come back from the future to help save the history of blueREP from being forgotten and lost. In order to do this, the three of them had to time travel into the past to pick up all the missing pages about each and every past blueREP productions. The three need to work fast because if they do not succeed, every memory about blueREP will fade forever.

We first heard present blueREP members sing the song "Magic to Do" from their maiden production "Pippin". As I learned from a video shown, blueREP was founded in 1991 by Dennis Temporal. For its initial show, Temporal chose "Pippin," which he was able to produce with a grand amount of P2,000. From such a humble and challenging beginning, blueREP had now grown to be the only musical theater group in the Ateneo de Manila University, and the premier college-based musical theater group in the whole country. 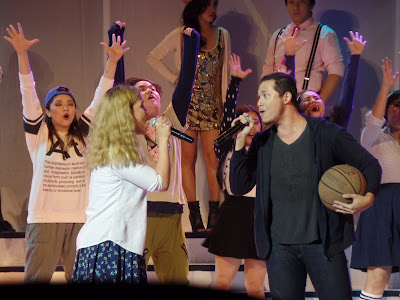 These present members were practically in every suite throughout the show. They definitely got their hearty fill of physical and artistic challenges doing this show, either by themselves or supporting the visiting guest alumni performers. The frenetic and colorful suites for "High School Musical" ("Stick to the Status Quo") and "25th Annual Putnam County Spelling Bee" ("Pandemonium") were particularly fun and entertaining.

Then we see a series of blueREP alumni to perform their respective solo spots. I first recognized Red Concepcion with a song from "Freakshow." Vic Robinson III sang "Lost in the Wilderness" from "Children of Eden." Mako Alonso performed the title song from  "Footloose". Derrick Fuentes sang "Giants in the Sky" from "Into the Woods." Tanya Manalang had a smashing rendition of "Come to Your Senses" from "Tick...Tick...Boom!"  It was a pleasant surprise to hear pianist/musical director Ejay Yatco burst into song, singing "Not a Day Goes By' from "Merrily We Go Along." Abi Sulit soulfully sang final song of Act 1 which was "Home" from "The Wiz." 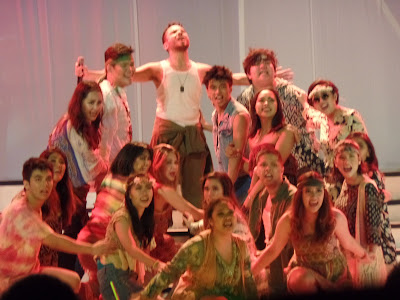 Gab Medina and ensemble in "Hair"

After a 15 minute intermission, Act 2 began with a suite from "Once on this Island" from the "Prologue" to "We Dance" and "Waiting for Life." Then the scene shifted to the coffee shop setting of the show "Stages of Love" and the ensemble sang "Ale (Na Sa Langit Na Ako)" in counterpoint with "Limang Dipang Tao."

Maronne Cruz led off the suite from the dark musical "Spring Awakening," singing Wendla's song "Mama Who Bore Me." The boys then followed by singing "The Bitch of Living." Gab Medina took on the role of Melchior to lead the group in the singing of "Totally F**ked." Bibo Reyes took on the big stage by himself for the song "Role of a Lifetime" from "Bare." An suite from "A Little Shop of Horrors" included the song "Feed Me." The psychedelic suite for "Hair" featuring a moving rendition of "Let the Sunshine In." The hip-hop suite for "In the Heights" included the lively rap of "96,000."

A special suite was dedicated to the first original musical of blueREP, "Toilet the Musical" written and composed by Ejay Yatco. The storyline was about painful experiences high school students go through in high school. The dramatic songs were rendered by the ensemble led by Vic Robinson III, Abi Sulit, Boo Gabunada, Gabriela Pangilinan and Nel Gomez.

Since this was only a TDR I am watching, the flow is still rather rough, with uneven transitions from scene to scene with video and sound glitches. The acting and singing was occasionally stilted or awkward, but I am thinking that they were just getting used to the stage set up and blocking. This, after all, is still just a rehearsal.

I am sure directors Toff de Venecia and Andrei Pamintuan all of these kinks will be ironed out by time the 8 pm concert proper begins -- barely an hour after the rehearsal ended just before 7 pm. I can imagine how awesome the actual show will be. There is no denying the power of youthful zest and energy in this show. Happy 25th blueREP! 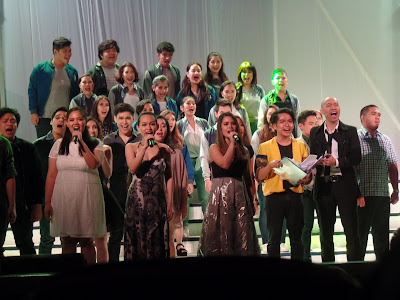