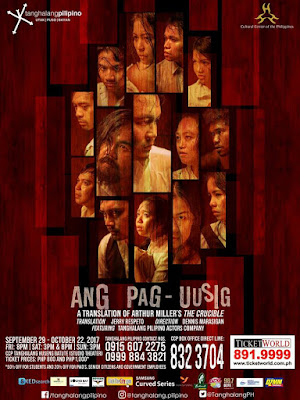 "Ang Pag-uusig" is the Filipino translation of the classic 1953 Arthur Miller play entitled "The Crucible." We usually know the word "crucible" to mean a vessel used in conditions of extreme heat. In the context of the play's title, "crucible" also means an extremely trying test or experience. This is the same meaning expressed in the Filipino word "pag-uusig" meaning a trial, but it is more usually used to refer to a legal trial.

It was 1692 in Salem, Massachusetts. A girl named Abigail Williams and her posse of suggestible girls accused several townsfolk, in particular Mrs. Elizabeth Proctor, of being witches. It turned out that this was a personal vendetta against Mrs. Proctor, who fired Abigail from being their maid because of her loose morals.

John Proctor fought for his wife's innocence by convincing their new maid Mary Warren to testify in her favor. However in front of the Deputy Governor Danforth and Judge Hathorne in the courthouse, Abigail and her friends resume their false demonic possession act to turn the judges against Mary Warren and the Proctors. 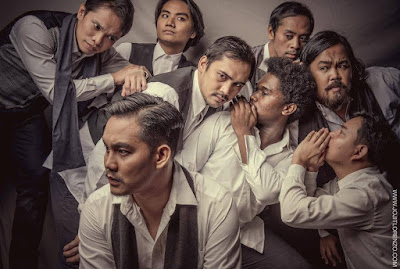 The Filipino translation done by Ateneo Philippine Literature and Theater professor Jerry Respeto is easy to understand yet powerfully eloquent despite the alien situations and names to which the language applied. There were some surprising seemingly modern-sounding Filipino words used which drew audible reactions from the audience. It was just too bad that some of these words could hardly be heard clearly as delivered by some actors.

The stage designed by Ohm David was basically an imposing wall made of dark-colored wooden panels serving as the backdrop. This was converted by the Parris residence to the Proctor residence to the Salem Courthouse by spare and simple set pieces. This wall will reveal an eerie scene behind it by the end of Act IV.

The costumes were designed by James Reyes. These were mostly in drab colors -- blacks, whites and browns of Puritan America. The only color onstage are worn by the trouble-making Abigail and her friends, who had bright colored accents in their dresses. Weird though why the character of Judge Hathorne was wearing a working barong Tagalog, further emphasizing the awkward portrayal by Daniel Gregorio. 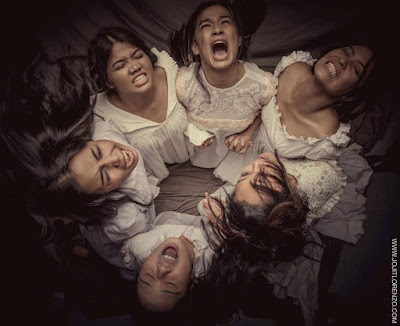 The cast is composed of the Tanghalang Pilipino Actors Company.

As the man in the middle of all the intrigue, JV Ibesate was intense as the disgraced and desperate John Proctor. I think this was the best performance I had ever seen him in with the TP crew. The scene when he publicly admitted his greatest sin in Act III, and his passionate scene with his wife in Act IV were so well-played.

Jonathan Tadioan looked quite at home playing the despotically authoritative Danforth. He had deluded himself to be absolute correct, unable to go back anymore on any of his past actions. Marco Viana played the hypocritical Rev. Parris. His best scene was that revealing his all-too selfish reasons like a frayed bundle of nerves in Act IV.

Joshua Tayco was really trying his best to project maturity as witch-hunter Reverend John Hale but his young age gets in his way. This was the same limitation with Aldo Vencilao as Giles Corey, an elderly man whose curiosity about the book his wife was reading led to her being arrested as a witch. Ybes Bagadiong played the greedy Thomas Putnam, a casting choice that did not seem too fit. 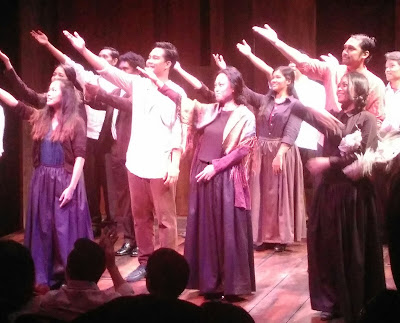 Cast during the Curtain Call

Since there were only 12 of them, some ladies are playing two roles, which can be a little confusing since they play contrasting characters. Doray Dayao played both upright Elizabeth Proctor (in a show of remarkable quiet strength) and the slave Tituba, who knew black magic. Lhorvie Nuevo played both the flighty Mary Warren (a character who perfectly fit her quirky personality) and the saintly old Rebecca Nurse (a role where she felt miscast).

Antonette Go revealed more of her acting range as the wickedly manipulative Abigail Williams. Go's powerful performance boils up so much feeling of hate for this shameless, remorseless character. That moment in Act III where the despicable Abigail conjures up an imaginary yellow bird representing Mary Warren's spirit possessing her and her girls (Eunice Pacia as Mercy Lewis, Monique Nellas as Susana Walcott and Blanche Buhia as Betty Parris) was a memorable highlight of female group hysteria, and Go was the charismatically malevolent spirit in the midst of it all.

Kudos to director Dennis Marasigan and the rest of the Tanghalang Pilipino cast and crew. Being presented by TP, you cannot help but feel an undeniable political undercurrent throughout the witch-hunt scenes and how it mirrored the current situation in the country these days. As Arthur Miller used this play to comment on McCarthyism and the communist scare, TP is using this play now to comment on the drug war and EJKs. Such is the compelling timelessness of well-written theater.

"Ang Pag-Uusig" will run from Sept. 29 to Oct. 22, 2017, with 8pm shows every Friday and Saturday, and 3pm matinees every Saturday and Sunday. The venue is in the intimate Tanghalang Huseng Batute at the Cultural Center of the Philippines. Tickets are selling at the CCP Box Office and via TicketWorld at PHP 1000 (VIP), PHP 800 (Bleachers). There is  50% off for students. Play is rated PG for its mature elements. Play runs for 2 and a half hours with a 10 minute intermission.