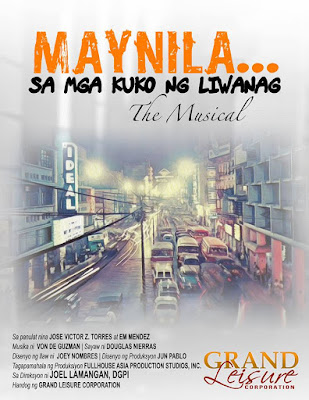 I had seen the classic Lino Brocka film of the same title before, which was based on a novel by Edgardo Reyes. I recall it to be a bleak and gritty drama starring Bembol Roco and Hilda Koronel who turned in memorable performances as the star-crossed lovers Julio and Ligaya, who fell into the inescapable claws of the city. I was very surprised when word surfaced just a couple of months ago that there would be a new original musical based on this film. It did not seem possible, but knowing Filipino artistic ingenuity, no idea was impossible.

Julio Madiaga went to Manila to look for his girlfriend Ligaya Paraiso who had been recruited to work by a certain Mrs. Cruz. To make ends meet during his quest, his friend Pol pointed him to the construction site run by the ruthless foreman Mr. Balajadia. Julio's co-workers welcomed him warmly, especially his new friend Atong. When Julio finally found Ligaya, circumstances simply would not allow them to get back together again. 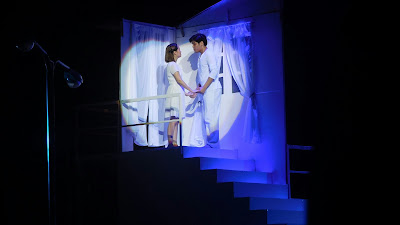 The best thing about this musical is its dynamic music and its soaring songs, perfectly rendered by its triple threat cast. From the very first song number, I was enthralled by the huge number of performers on the stage, probably reaching 40, all singing and dancing together. The first song told about how there was no room for a weak constitution in the city, or your life will just go to waste. The choreography was frenetic with jerky movements to match the energy of the catchy song itself.

There next song number ("Basta't Ikaw ay May Diskarte") was a jazzy one performed by the construction workers about the Filipino virtue of "diskarte" (roughly translated to "resourcefulness"). This was a fun number that even ended in an improbable chorus line. This segued to another upbeat and happy song "Kung Maka-Jackpot Lang Ako", about getting lucky in life, led by working student Imo (played by Rafa Siguion-Reyna, with Joseph Puducay as alternate), which even featured a surprise song and dance solo by Mr. Balajadia (played by Jim Pebanco, with Joseph Billeza as alternate). 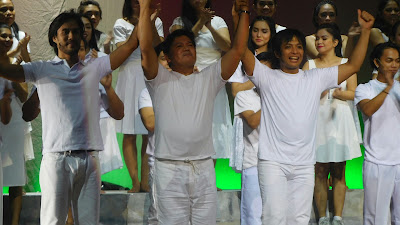 The next song was a yearning ballad about what ifs ("Minsan May Isang Panahon") sung by Julio, later joined in by Ligaya as a duet, even if they do not actually see each other. There would be another song later ("Kailan Ba?") about misfortune in love, also blocked separately onstage, featuring Pol and Atong's sister Perla. Still later, there would be a quartet arrangement of "Bawa't Oras Bawa't Sandali" -- a song about how time passes in Manila with all four of them (Julio, Ligaya, Pol and Perla) in  four different parts of the stage.

The most show-stopping number of the whole show was the closing number of Act 1. While this featured a funeral march, the execution was far from being funereal. It was done with the most bombastic combination of electric choreography and dramatically red lighting. The final tableau about the "Sigaw ng Manggagawa" ("Shout of the Workers") was a very strong moving image that will haunt you long after you've seen the show.

In an effort to lighten up the mood of this drama, the villains in the story were mainly made out to be the comic relief. First is the unscrupulous recruiter Mrs. Cruz (played tonight by Dulce, with Ima Castro as alternate). Second is the sadistic Chinese businessman Ah Tek (Joseph Billeza). Their delightful sarcastic song together that opens Act 2 "Teka Teka" was about how we should not judge immoral employers like them because they do help many people out with their businesses anyway. It was a lot of fun seeing them do their dance moves. 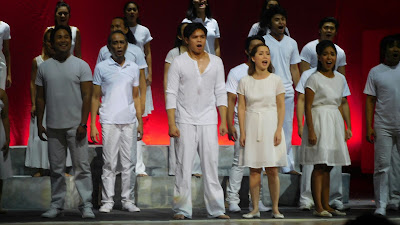 Ferrer, Valderama-Martinez lead the ensemble in the finale


All the main singers were in top form tonight, which made all of their songs sound so good.

Arman Ferrer's singing voice as Julio was so solid and clearly enunciated, with an incredible falsetto and at one point, even a rocker's wail. It is hard to pick one song where he did best, because every song he sang sounded so good, be it soft and sweet, or full and loud. What made the flawless voice quality more impressive was that he mostly had to sing these songs after exhausting scenes where he had to run and jump around the stage.

I had never seen Shiela Valderama-Martinez in a Filipino language play before. I had also never heard her attack such sadistically high notes so powerfully before. Her best solo vocal singing performance was with "Awit ni Ligaya", her song of lamentation about being eaten up by the monster that is Manila. While her portrayal of Princess Fiona remains her best performance in English, this one as Ligaya is easily her best performance in Filipino. (Lara Maigue alternates in this role.) 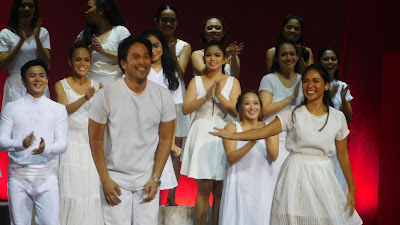 We loved Aicelle Santos as Aileen in "Rak of Aegis" and we know she can belt with seemingly unlimited range. Her voice here as Perla was all so crystal clear and clearly rose above the rest of the ensemble she sings with. Her best song was "Nasaan ang Hustisiya?", a desperate plea for justice which she sang in the wake of a man who died under suspicious circumstances. She hit that money note at one point so perfectly everybody erupted into wild appreciative applause, even it was really the end of the song yet. (Rita Daniela alternates in this role.)

Floyd Tena had a lighter, more pop-sounding tenor tone as Pol, which he showed off in a dramatic solo number singing about life in Manila ("Laking Maynila"). Not to throw any shade on Tena's winning performance, but if the production wanted to streamline the show further (it lasted a long three hours with a 15 minute in between the two acts), maybe they can trim down some of Pol's scenes talking with Julio because they tend to slow down the momentum of the storytelling.

Noel Rayos may have had only a couple of solo vocals heard but his singing voice was strikingly strong as Atong. The rest of the cast include: Khalil Kaimo (Gido), Jeffrey Camanag (Omeng), Romcel Binquis (Benny), Randy Rey (Frank), and many more talented actors, singers and dancers in the ensemble. 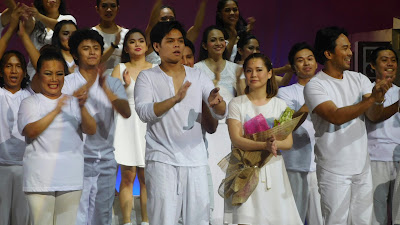 Big kudos to Director Joel Lamangan and the entire artistic team behind the show namely: , Von de Guzman (Musical Director), Jose Victor Torres and Em Mendez (Libretto), Joey Nombres (Lights Designer), Douglas Nierras (Choreographer), and Jun Flavier Pablo (Production Design). The direction, acting, original song compositions and choreography of this show were outstanding and, for me, are clearly on their way to year-end awards. I want to own a CD of the songs -- I surely hope they would release an original cast recording!

The proceeds of this show go to Gantimpala Theater Foundation, the company that spearheads the National Artist Production Series in which short stories and plays written by National Artists for Literature and Theater are produced for the stage for people to enjoy and appreciate.