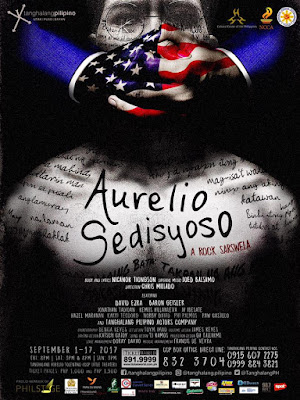 This new musical play from Tanghalang Pilipino "Aurelio Sedisyoso" (literally, "Aurelio the Seditionist") is dubbed a "rock sarswela" about a heroic intellectual artist whom not everyone knew -- Aurelio Tolentino. I confess I knew next to nothing about his life even if I knew his name because the CCP Little Theater is formally called Tanghalang Aurelio Tolentino, coincidentally the venue of this very show about him.

The musical begins at the turn of the 20th century when the Philippines was newly under the control of the American colonials. By then the revolutionary forces for Philippine Independence was being conducted in three key fronts. The military was under Gen. Macario Sakay, The labor sector was under Dominador Gomez. The theater artists were under Aurelio Tolentino, whose forte was the symbolic drama.

In 1903, Tolentino wrote and produced his play entitled "Kahapon, Ngayon at Bukas" ("Yesterday, Today and Tomorrow") which directly enjoined the audience to join the revolution against the Americans. His repeated arrests and incarcerations from that time on adversely affected his family life, as well as his friendship with his lawyer, future president Manuel Quezon.

This is the first time I saw David Ezra perform and he is indeed impressive with his vocal gifts as Aurelio Tolentino. His tenor can definitely soar but his lower registers are likewise solid. There was one song when he hit a perfect Ted Neeley-like rock wail which caused the audience to spontaneously erupt with applause. He was the most consistent vocal performer of the whole show, though the demands of his final song seemed to take its toll on his voice last night. A small drawback was that he seemed to be too young-looking to play Tolentino, whom his actors called Tatay.

The role of Tolentino's symbolic antagonist Tikbalang representing the American Government. Playing this role last night was Jonathan Tadioan in another one of his richly nuanced, scene-stealing performances. There must have been some microphone issues because I could not tell at times if Tadioan was speaking in English or Filipino (and he is definitely known to speak clearly). It was much hyped that this role was to be played by movie bad boy Baron Geisler in his first theater role. I'm sure people were expecting him for Opening Night, but that did not come to pass. 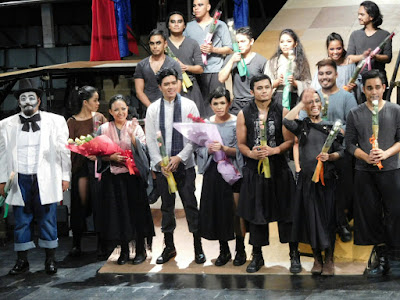 Main Cast Tadioan, Teodoro, Ezra, Maranan, Villanueva, Palmos, Ibesate
at the curtain call. with some of the company behind them


The role of rich and well-connected Dominador Gomez was played by JV Ibesate. By the end of the first act, I understood why probably I had never heard the name of this person before. The role of Macario Sakay was played by Remus Villanueva. I expected the part to be longer than it was, though he did figure in a "gory" tableau. Villanueva also ditched the long wig and hoodie to play Andres Bonifacio in other parts. The frills-free performance of Rivermaya vocalist Norby David as clean-cut Manuel Quezon stood out for me.

Tolentino had two wives, one wife for each act of the show. His first wife Saling was played by Hazel Maranan. His second wife (after a whirlwind courtship it seems) Natividad was played by Kakki Teodoro. Both ladies were in good soprano voice last night, always crystal clear in their song delivery, overcoming any microphone issues.

Tolentino and Saling had two children, Crising (a girl, but played coyly by Phi Palmos) and Didoy (played by Paw Castillo). They both have their respective featured songs. The scene and song where Celing was introducing a strapping new actor Dodong (Aldo Vencilao) to her father was the scene that finally broke the ice with the audience. Didoy had his big moment in Act 2 when the girl he fancied named Diday (Blanche Buhia) broke off with him. A third child Corazon was introduced in Act 2 when she was fined in school by her Marilyn Monroe-wannabe teacher Ms. Diwata (Sasa Cabalquinto) for speaking in Tagalog.

The playwright and librettist is Nicanor Tiongson, the same genius behind the last TP hit "Mabining Mandirigma." This new play continues to explore the issues of American colonization from 1902 to 1907, including the pushing of English in schools and organization of the National Assembly. The musical director and composer is Joed Balsamo. I get vibes of "Jesus Christ Superstar" and "A Chorus Line" in his musical score here mixed in with the classical sarswela, with touches of hiphop. The arrangements were done by Francis De Veyra of Radioactive Sago Project under Balsamo's supervision.

The best production number in the show for me was the fliptop rap battle between Jonathan Tadioan and David Ezra during the trial scene. The rapping of these two guys was so crisply enunciated to the beat of the driving Another remarkable number was the duet number of Ezra with Norby David with both of them playing acoustic guitars. The musical talent levels here were really off the charts.

The multi-level, multi-stage set designed by Toym Imao was huge as it sprawled across the entire audience area of the the Little Theater. The first act ended with a carnival spectacle featuring one gigantic equine set piece with lights. The lighting design of Katsch Katoy along with the graphic projections of GA Fallarme gave this already expansive set more depth and color. 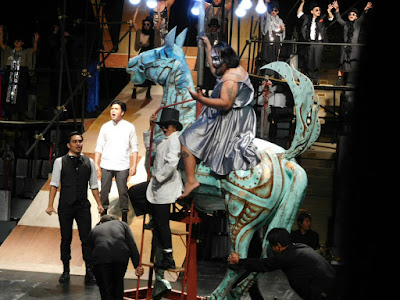 I may be too traditional in my preferences, but there are times when I felt that the anachronistic choreography by Denisa Reyes would confuse rather than enhance the story being told. James Reyes's costumes (with all the skirts and tulle overskirts) did not work too well for me in this production, especially when compared to his amazingly innovative work in "Mabining Mandirigma".

There were still a lot of sound glitches that hounded the show throughout, understandable for opening night. The live band (the 3-piece Radioactive Sago Project Rhythm Section with Balsamo on the keyboard) would oftentimes compete with the singing with their inordinately loud, occasionally off-key instrumentals. Even the violin of the soloist sounded twangy. Because of this, I could not understand many of the lyrics being sung, a lot of times I just relied on context. I am sure adjustments would be made to correct these sound issues.


The cast are all known to be triple threats, but there are times when the singing harmonies among the company members also sounded off-key. One particularly awkward sounding number was when a Filipino song was sung in counterpoint with "God Bless America." That combination did not blend smoothly last night. I am sure adjustments would be made to improve these arrangement issues.

I commend and congratulate director Chris Millado for taking on this massively ambitious project full on. There was really a lot of material to show and tell that the show lasted almost three hours (with a 15-minute intermission). There may still be room for streamlining the telling of the story, especially in Act I which may feel long for some viewers. Act II picked up some pace but the ending felt like it came on too suddenly. Anyhow, while this story may have happened at the turn of the previous century, we can still feel its pertinence during our present time when love of country is very much an issue of importance.

"Aurelio Sedisyoso, A Rock Sarswela" runs from September 1 to September 17 at the Tanghalang Aurelio Tolentino (CCP Little Theater). There is an 8 pm show on Fridays and Saturdays, and 3 pm shows on Saturdays and Sundays. Tickets at P1,500 and P1,000.