Review of The Necessary Theater's BLACKBIRD: Payback for a Predator 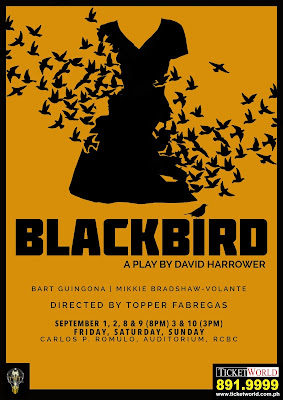 This year The Necessary Theater has chosen to stage a critically-acclaimed harrowing two-hander play written by Scottish playwright David Harrower back in 2005. It had won the 2007 Laurence Olivier Award for Best New Play. When it was revived in Broadway in 2016, it garnered  Tony Award nominations for Best Revival of a Play, Best Actor Jeff Daniels) and Best Actress (Michelle Williams). This local staging will have the dynamic Topper Fabregas at the helm.

One day, a 55-year old office employee Peter Trivinian unexpectedly gets a visit at work from a pretty 27 year old young woman named Una. He led her into a room to talk in private. It turns out that 15 years ago, 40-year old Peter (then called Ray) carried on an illicit sexual affair with 12-year old Una which eventually wound up in a nasty trial for statutory rape and incarceration for Ray, and cruel social ostracism for Una. 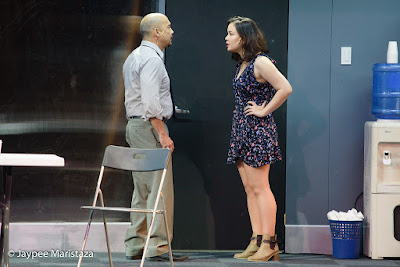 The set was a typical multipurpose room in an office where employees would eat their meals during break time. Set designer Joey Mendoza made it feel very cold in there because of those silvery gray metallic wall paneling, which later turned out to be translucent blinds through which you can see the blurry bustle of activity outside. Prominently placed in the foreground on the right is a big trash bin overflowing with garbage. There were lockers at the back, and a water cooler that does not work. On the left side are random piles of storage boxes full of paper.

Eight white fluorescent lamps ominously hang overhead. As designed by John Batalla, these lights were made to turn off one at a time to slowly dim the room during key moments of the play to heighten the brewing mood of tension inside. During an intense flashback monologue by Una, all eight of these white lights were off and a warm yellow spotlight was focused only on her. The power outage scene felt very real when there were emergency lights that automatically turn on.

And then there were just these two people talking on and on about an affair between them that happened 15 years ago. At the start, the man was obviously flustered, speaking nervously in fragments; while the girl was composed and confident, knowing she had the upper hand. The moods of the conversation will then switch up and down, shifting from one character to the other, mesmerizing the audience as they hear a mystery unfold. The topic is not easy to listen to. The language use is blunt, frank and direct. It was a very unsettling 90 minutes for an audience, but we are riveted. 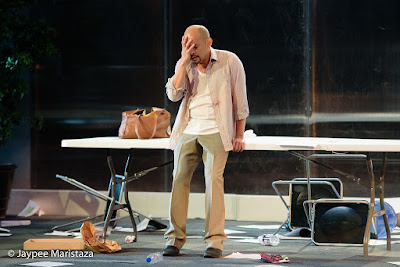 Bart Guingona plays Ray, a man trying desperately to move on after a major failure of judgement in his past. He thought he had already done so, reestablishing himself as Peter, a respectable employee at this medical equipment firm. But then that evening, his nightmare came visiting in a cute floral mini-dress. Guingona, as always, was very natural in his acting. His distress and panic and loneliness all felt very real.

The very situation of seeing an older man talking to a younger girl in a two-hander play brought back memories of David Mamet's "Oleanna"  which I watched when New Voice Company of Monique Wilson staged it maybe 10 years ago or so. Suddenly it dawned on me that it was actually Bart Guingona also who played the role of the older man in that play! Guingona's character then was a professor accused by his female student of sexual harassment. No wonder the performance felt familiar in its feeling of helpless despair and emotional breakdown. 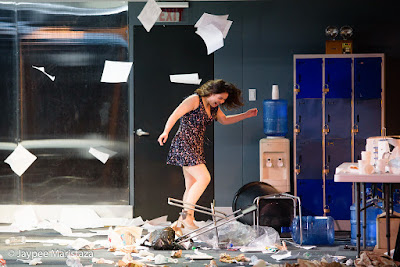 Mikkie Bradshaw-Volante plays Una, a girl trying desperately to move on after a man took advantage of her innocent pre-teen crush.  The first time I saw Mikkie Bradshaw on stage was in a dark production "Carrie" by Atlantis four years ago. Even if she was still a newcomer at that time, she held her own ground opposite Menchu Lauchengco-Yulo who played her dominating mother. It was only this time that I had seen her in another lead role, and she has certainly grown more more mature as an actress.

Una is such a complex character for any actress to play. What was she really hoping to achieve with this visit? Was this for revenge? Or was this for reconnection? Was this visit one of hate? Or was it one of love? Una is the one driving the story forward, with Ray merely reacting to her every word. Bradshaw-Volante's portrayal captured this vagueness with all her little character quirks and nuances. This performance of hers as Una is certainly of Best Actress caliber.

Congratulations to Director Topper Fabregas and the rest of Necessary Theater's cast and crew for their excellent work on this controversial material. Admittedly, this topic is not audience-friendly at all, being the stuff people would rather not talk about, stuff people subsume in their subconsciousness. Nevertheless, this staging of "Blackbird" is still an immersive theater experience that deserves to be seen, if only for its two powerful acting performances alone.

BLACKBIRD opened last September 1, 2017 and will run for only 6 performances up to Sept. 10. Showtime is 8 pm for Fridays and Saturdays and 3 pm on Sundays. Venue is at the Carlos P, Romulo Auditorium of the RCBC Plaza in Makati. Ticket price at P1200 for Orchestra Center, P1000 for Orchestra Sides and Back, P800 for Loge, and P500 for Balcony. Show is for mature audiences only because of its sensitive nature. It runs for 90 minutes straight with no intermission.

P.S. I really hope RCBC Plaza would be able to adjust its parking rates for the sake of theater viewers. The new rate is P60 for first 2 hours, and P25 for every hour or fraction thereof after that. I was given an extra card at the theater door to prove that I watched a show in the Auditorium. I thought that would limit the parking rates. However when I went to pay however, I still racked up a parking bill of P110.