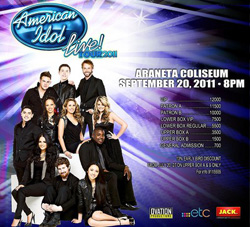 This much-awaited concert started quite late, almost 9pm.  Ryan Seacrest appeared on the big screen to kick the concert off.  The audience was wild with excitement and restlessness from the long wait.  For the opening number, all the girls came out in sparkling dresses singing Lady Gaga's "Born This Way."  Very energetic way to start things off.

The beautiful Pia Toscano took center stage first.  It was so good to hear her singing newer songs instead of old 80s ballads like she did in the show.  Her set started with Alicia Keys' "Empire State of Mind".  She then segued to Rihanna's "California King Bed", which turned out to be a duet with Stefano Langone (who may have received the loudest screams last night). (VIDEO)

Paul McDonald then came out amidst the green lighting effects to singing Rod Stewart's "Maggie May" (VIDEO) in his own inimitable quirky way, just like he did on TV. His voice had this tendency to trail off, but he really moves around the stage a lot.

Thia Megia followed singing the upbeat Selena Gomez song  "Who Says."  (VIDEO) Aside from this solo number, we also see Thia sing back up in several other numbers.

Pia, Thia, Naima and Haley then got together for a fast number called  "Tightrope".  The lighting design for this number were moving yellow stripes and arrows that added more visual energy on the stage than what we see from the girls.

Stefano Langone then came out of the spotlight on the keyboard amidst very loud screams. The screams escalated as he began singing the Bruno Mars hit  "Grenade."  He then took off his white blazer and began dancing with the girls as he sang  Usher's "DJ's Got Us Falling in Love Again."  The screaming went up a notch when the Italian raised his black t-shirt to reveal his torso.  He showed off some of his bad boy dance moves. Towards the end, he actually took off his shirt!  My ears did not really recover at once from the high-pitched screaming that final stunt of his elicited! (VIDEO)

The boys (except Scotty) all came out on stage in what looked like house clothes (haha!) to sing "Animal" by the Neon Trees.  They were fooling around more than seriously singing in this number.

Jennifer Lopez appeared onscreen to greet the audience.  After her short spiel, Naima Adedapo came out in a colorful gypsy outfit to the strains of "Lambada".  Of course, this meant she was going to perform "On the Floor" by JLo.  And perform she did!  Her wild exotic dancing came out full force, complete with one-handed cartwheel and split! (VIDEO)

Pia came out again in a simple royal blue outfit singing her first single  "This Time."  Good song, but Pia seems to really have a problem connecting with the audience during her performance. Her music video was shown simultaneously as she sang this uptempo ballad.

Then the spotlight fell on Casey Abrams with a double bass.  He began singing  "Smooth" (by Santana ftrg. Rob Thomas).  From a slow start, this escalated into his signature syncopathic jazzy singing style.  Rumored GF Haley Reinhart came out to join him in a jazzy rendition of "Moanin'" like they did during the season.  Finally, Casey took on Maroon 5's "Harder to Breathe" (VIDEO) with such a wild fervor.  He is really the original artist in this group.

Whole gang then came out in red coats to sing Cee Lo's "Forget You."  Aside from this bright costume, the number and vocals were just alright.  After this group number, there was a 15 minute intermission.

After the break, the screen displayed the name of the runner-up, Lauren Alaina.  The whole mood of the show became Country all of a sudden as Lauren tore into her hits from the show like Katrina Elam's "Flat on the Floor," her coronation song and first single "Like My Mother Does," and the more pop-sounding song "If I Die Young" (by The Band Perry) (VIDEO).  Not too easy for the audience to get into these songs though.

Judge Steven Tyler delivered his short spiel onscreen.  Of course, it had censored bits.  Then the guitar player started to play the opening riff of Guns N Roses anthem "Sweet Child of Mine." James Durbin is next!  With his flair for dramatic entrances, James came from among the audience.  There was even an expletive there in his greeting (haha!)  (VIDEO)  His next song was "Victorious" by Judas Priest.  That last stanza was sung in full-on heavy metal rock screaming that only James can do!

Big guy Jacob Lusk then lumbered out on stage for the RNB part of the concert.  He sang a couple of songs, the best of which was "You're All I Need to Get By".  His voice quality was much better than what we heard on TV, but the loss of control is really there.  He was not as annoying as he was on the show.

Haley Reinhart was up next.  She wore another slinky, shiny and short outfit as she belted out a bluesy "House of the Rising Sun".  Her second song was "Bennie and the Jets".  Her voice was very strong, although hearing her live, it had a high-pitched quality which is not quite apparent on TV and her recordings.  Too bad she did not sing Adele tonight.

The center screen then began to show video montage of all the AI winning moments all the way from Kelly Clarkson to last year's Lee Dewyze.  Finally we see this season's final two on the screen.  We knew Idol champ Scotty McCreery's  turn at the mike.  We did not see him yet the whole night, as he did not join any of the other numbers.

Scotty's solo set started with his audition song "Your Man" by Josh Turner (or better known as "Baby lock em doors and turn your lights down low" song).  Boy, those girls in the audience go wild as he hits those LOW notes!  He then came out with his guitar and sang Thompson Square's "Are You Gonna Kiss Me or Not?"  His next song is his coronation song and first hit single, "I Love You This Big."  The audience loved it when he sang a more familiar song "When You Say Nothing at All" as a sweet duet with Lauren. (VIDEO) His final song was Montgomery Gentry's "Gone" (VIDEO) which he performed with all the girls as backup.

Randy Jackson delivered his "In it to win it" spiel on the big screen.  The ending number that followed was a bit of a mess:  James and Lauren took on "Here I Go Again" by Whitesnake.  Then Paul, Haley and Casey sang a great version of "Faithfully" by Journey. Stefano, Naima, Thia and Jacob then had a run with Aerosmith's "Walk This Way". Everybody came out and rocked out on Journey's "Anyway You Want It."  The whole concert was cooky, young and unpolished, but ultimately, it was a fun and entertaining night of music for all!  All the musical genres from pop, to rock, to metal, to RnB, to country were sampled.  Arguably, this Season 10 was truly the best batch of contenders that AI had.  Good concert!