When we reached the Araneta Coliseum for the Bruno Mars concert, it was already past 8pm.  To our surprise, there was still a long line outside for the Upper Box!  When we got inside the coliseum, the seats in the Upper Box were already quite full.  Luckily, there I chanced upon a couple of "healthy" girls who were occupying four prime seats in the middle of a row. For a second stroke of luck, the both of us fit into that space quite comfortably. 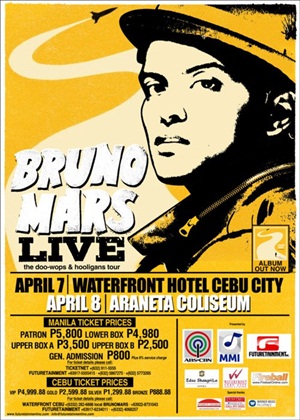 By that time, the first front act, Juris Fernandez, was already winding up with her second and last song, a cover of "Ironic" by Alanis Morrissette.  To her credit, her voice sounded quite good.  However, it was not really very memorable.

After a short break, the videos announced the arrival of the second front act.  He was a guy I only heard about in the past few days when his name was being promoted as the front act of this concert.  His name is Michael Copon, a Fil-German Hollywood actor whose main claim to fame was being Kim Kardashian's boyfriend for a while. The girls in the Araneta seemed very excited to see him.  He was singing a series of abridged covers of recent hits like "OMG" by Usher, "Baby" by Justin Bieber (yeah, really) and a couple of Black Eyed Peas songs "Time of My Life" and "I Gotta Feeling."  (VIDEO) He also had some songs from his "album", which were bland and monotonous as they come.  The highlight of his segment was a part where he serenaded this girl Bea whom he picked from the audience.  He playfully teased this girl to the delight (jealousy?) of the other girls there.

The next break was a longer one, about 30 minutes, before finally, the band entered the stage.  Suddenly, Bruno Mars was spotlighted playing a mean solo on the drums!  His first song was the last song on his album, "The Other Side."  This was immediately followed by "Top of the World."  When we heard give a shout-out to his friend Travie Mc Coy, we knew the next song would be "Billionaire."  (VIDEO) The crowd went wild with this song!  After this, Bruno slowed things down with a slow sexy number called "Our First Time."


Before he sang his next song, Mars asked the people to excuse him while he fooled around with some songs.  The band began to play the classic riff of Nirvana's "Smells Like Teen Spirit."  When he began to sing though, the lyrics were those of Michael Jackson's "Billie Jean."  Great mash-up.  He then segued into another Michael Jackson classic song "I Want You Back."  Very good tribute to his idol and musical influence.


Bruno and his posse on stage did some fantastic barbershop quartet harmonies.  This led into the very poppy and happy song "Marry You."   This immediately led into another happy little number, his current Hot 100 hit, "The Lazy Song."  Bruno then took up his ukulele and began to dedicate the next song to "barkadas" in the audience.  This song was the jaunty and folksy "Count on Me."  The next song was the awesome "Liquor Store Blues" which featured very strong vocals and instrumental work.


The next three hits came one after the other as the homestretch drew near.  His "Nothin' on You" was even dedicated to this pretty girl in the audience who was with Richard and Raymond Gutierrez.  I thought the girl was Kristine Hermosa (which brought to mind Mars' resemblance to Jericho Rosales).  Word is though, that the lucky girl was named Nichole Anderson.  From there, he introduced his next big song, "Grenade".  (VIDEO) Another loud and driving number with great vocals.  And finally, and as everyone was eagerly waiting for, his last song is the song that brought him solo success, "Just the Way You Are."  At the end of this very engaging song before saying goodbye, Bruno declared that he was proud to be a Filipino and will be coming back soon, eliciting wilder cheers from the audience.


The lights did not turn back on, so you knew there would be something more.  Bruno came back out amidst calls for an encore.  He sang his James Brown inspired number called "Runaway Baby."  (VIDEO) He displayed his terpsichorean skills as he slinked on stage.  This extra song ended the concert, which lasted only a little over an hour, as the lights came back on at 10:30pm.

I was very impressed with Bruno Mars skills as a total entertainer and songwriter.  His songs were very melodic, catchy and memorable.  His singing voice was very strong, especially considering this was his second night in the Philippines, after having a concert in Cebu just the night before.  His dance moves were very smooth, showing his rock and roll roots.  We saw an artist on the rise last night.  I am very sure more success will be heading his way in the future if he keeps himself grounded!  Great concert! Expensive (Upper Box tickets priced higher than the Taylor Swift concert) but well worth the price.