Myth of the Human Body: An Anatomic Exhibition in Manila 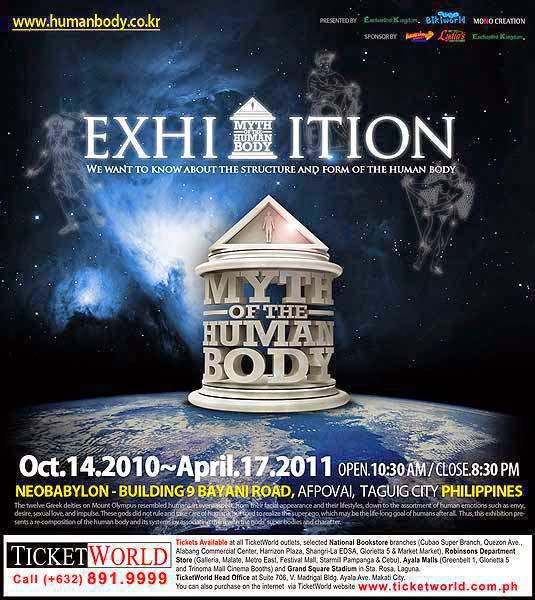 Ever since we watched this German horror film "Anatomy" about a museum displaying dissected human specimens, I have been very intrigued to visit an actual one and see these types of exhibits. When we went to New York last year, there was an exhibit like this called "Bodies" on the South Seaport. Too bad, I was not able to go see that one.

Late last year, we heard that there will be such a human body exhibit brought into Manila! Starting last October 15, 2010, an exhibit called "The Myth of the Human Body" was opened to the public.  Of course, I wanted to see it.  But no one else in my family wanted to! So it was an activity that was just in the back-burner until yesterday, when my daughter declared her interest to go there.  Then, even my boys wanted to go.  My wife only decided when we were already in front of the ticket booth.

The entrance fee was P350 per person, regardless of age.  Exceptions:  children 3 and below get in for free; senior citizens get a 20% discount.  Luckily, when we entered there was a group about to begin its tour in five minutes.  Our guide was a young lady who donned a white lab coat.  She spoke initially delivered her spiels in English, although later, she would use mostly Filipino.  Photography is not allowed inside the museum.  The entire walking tour would take around one hour.  There are restrooms in each of the three floors.

We started in the Heroes Hall where we were introduced to the Plastinization Process which preserved the bodies in this exhibit.  This process was developed by German scientist Gunther von Hagens in 1979, replacing the fluids and fats with polymeric plastics.  This way the specimens can be exhibited in room temperature.  In this first room, we see various complete human bodies in sports poses, like basketball, soccer or the centerpiece, discus thrower.  The bodies were all people from China, since von Hagens has a body bank there. These bodies were either donated for exhibition or unclaimed cadavers. The bodies look so much like plastic already, so that they look almost artificial, and thus were not that scary anymore (except for some), even for my wife.

Then we proceeded to go through the rest of the museum.  Each room was named after a Greek god, representing the human body system which is being featured.  These were Heracles (musculo-skeletal), Poseidon (respiratory), Dionysus (gastrointestinal), Hades (circulatory), Eros (reproductive), Zeus (nervous) and finally Artemis (fetuses). In each room, we see samples of normal and diseased organs. Our group was rather big, with more than 20 people.  It was quite a challenge to listen to what our guide was saying or see what she was showing. 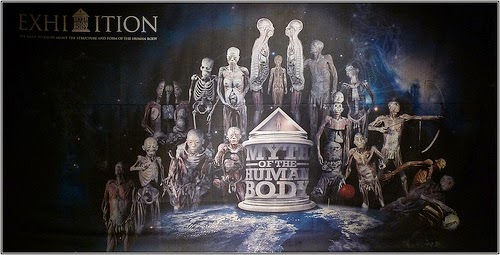 The most memorable exhibit for me is the Red Man, which was composed only of all the blood vessels, all arteries and veins and 70% of the capillaries!  I do not know what kind and how long of a dissection went into this awesome project.  Too bad there were already some pieces falling off of it.  Funny also how one of the elderly women in the group noticed and asked why the man's penis was completely red.  Other memorable exhibits were those of a sagitally-divided man, a man carrying his peeled off skin on his arm, the pregnant woman with open uterus to show the fetus, the completely axially-cut human body from head to foot. The most haunting exhibit, even for me, are the fetuses.  They even have samples of embryos in various (but undocumented) ages of gestation.

After the Eros room, we were shown an amazing movie called "The Birth."  I have no idea how and what technology they used to track the pathway from the fetal into the maternal hearts! Then they would go back and follow a sperm from inside the father, into the vaginal canal, the cervix, uterus and finally the egg inside the fallopian tube.  This was truly incredible film making.  For a movie called "The Birth", it was unfortunate they rushed through the actual birthing process.  I was a bit concerned as so many sexual terms were being used in front of the kids in the audience, but I guess the unfamiliar words just fly over their heads as they were fascinated by the images on the screen.

So I have described the museum and its exhibits.  Do you think you are up to coming for a visit?  It is a little macabre, yes, especially for the unfamiliar.  But this exhibit is very educational and interesting.  Its aim to promote love for your body by taking good care of it is of course very basic and important.  If you want to check this out, the exhibit will run up to April 17, 2011.  The exhibit is housed in the Neobabylon Building, 9 Bayani Road, AFPOVAI, Taguig City, between Bonifacio Global City and Heritage Memorial Park. Telephones:  8895467 and 8891724.  The place opens daily, from 1030am, and closes at 830pm.