I had really wanted to watch this musical version of Jose Rizal's "Noli Me Tangere" since I heard that it would be re-staged this year at the CCP Little Theater as part of the 150th Birth Year of our National Hero. It was my misfortune that all the shows during its 4-week run last August were sold out very fast so I was not able to get tickets.  You cannot imagine my elation when it was announced on the last day of the original run that two more shows would be added!  I made sure we would be able to catch the 3:30 pm show today, Sept. 11, 2011. 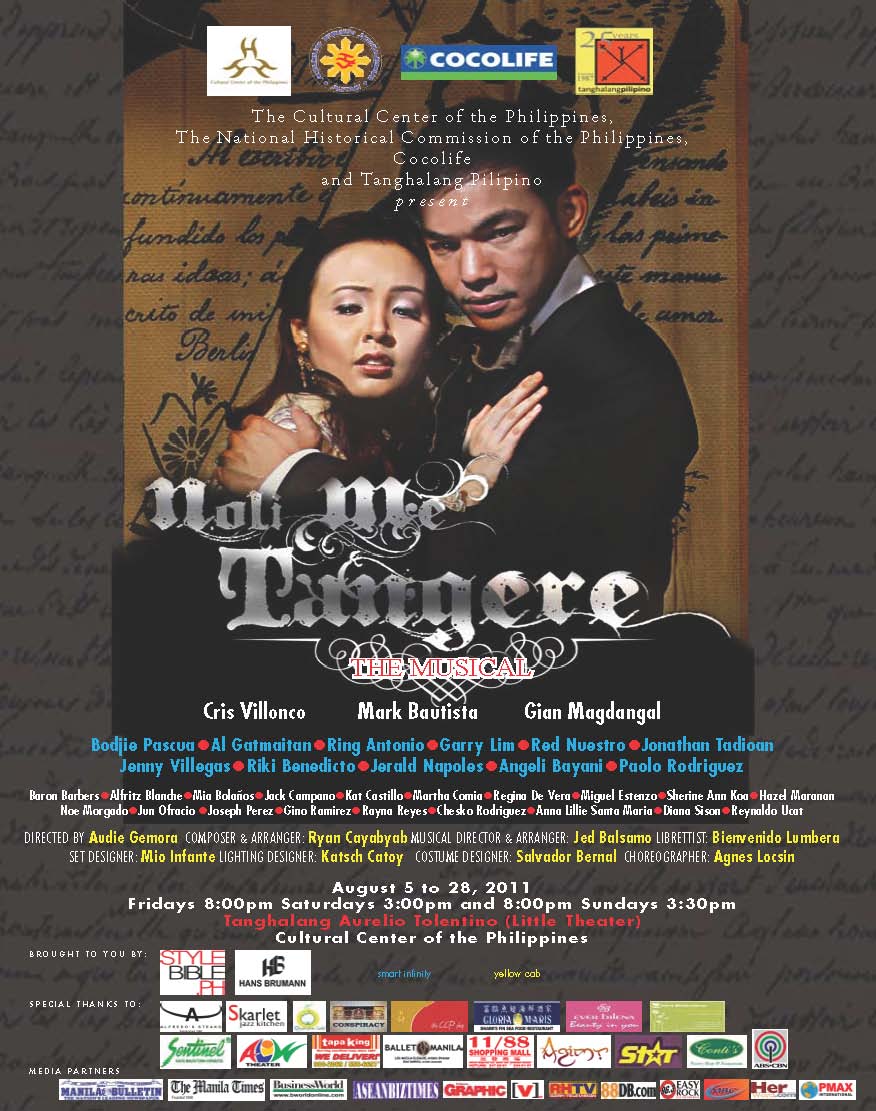 The stage was a simple with a grand staircase occupying it.  The action would be happening on different levels of these steps even deep behind them and even off-stage.  The blocking and stage direction by Audie Gemora was very effective in evoking the drama of the story.  The deep and mellifluous Tagalog libretto was written by no less than National Artist for Literature Bienvenido Lumbera, while the music was by Ryan Cayabyab.  Since the show today would be the very last for this run, all three gentlemen were in the audience.

The last time I ever read "Noli Me Tangere" in toto was back when I was in Junior High School in Filipino class.  As the scenes unfolded, it was nice to know that I still remember all of the iconic characters.  It was fascinating to see such memorable scenes like the crocodile incursion into the picnic, the laying of the cornerstone of Ibarra's school, Elias and Ibarra on the river barge, the bitter goodbye of the lovers, etc. come to life all on those steps.  Wonderfully imaginative maximizing of the limited space to contain all of this action. 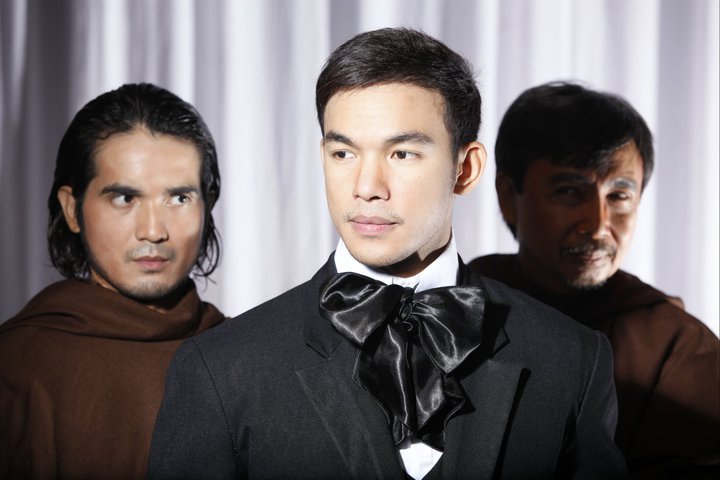 Today, the central role of Crisostomo Ibarra was played by Mark Bautista.  He was quite a revelation in this lead role.  I only knew him as a pop singer, a product of a TV singing contest that also brought us Sarah Geronimo.  But today, he stood proud with his strong theatrical singing voice.  And for someone in his stage debut, his acting was amazing in the difficult and highly emotionally-charged scenes with Padre Damaso, Elias and most especially, Maria Clara.  Mark should definitely do more musical theater.  His alternate in this role is Gian Magdangal, also a pop singer from a TV singing contest who had dabbled in musical theater before.  Gian appeared onstage today as Ibarra's rival suitor, Linares.  I think this was the "big surprise" previously announced for these extra shows.

Cris Villonco was a flawless Maria Clara.  Her beautiful soprano voice was effortlessly soaring in all her vocally difficult songs.  Her sensitive acting was as resplendent as her singing.  Her face was so expressive with those sad eyes!  I am sure there was hardly a dry eye in the house during that painful scene as she tearfully parted with Ibarra in the end.  The spontaneous long and loud applause after that scene was electric!  Mark Bautista was also riveting in that same excellently executed scene. 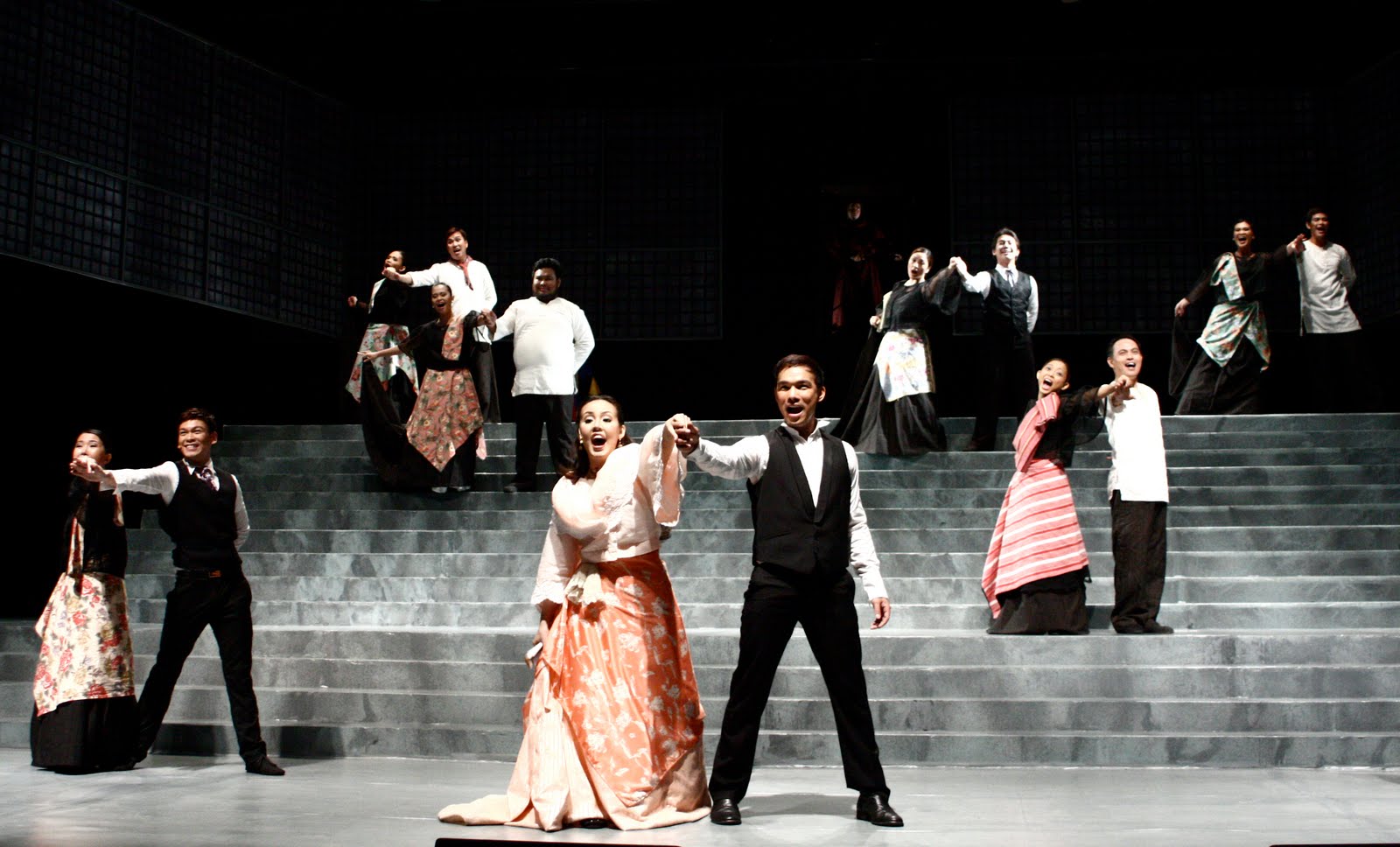 The rest of the characters were also very effective in essaying their roles, both acting and singing-wise.  Kuya Bodjie Pascua was the unexpected choice of actor for the famously reviled Padre Damaso. Even more despicable and sleazy was Al Gatmaitan in his slimy portrayal of the sinister Padre Salvi.  I never really pictured Kapitan Tiago to be fat, but Red Nuestro nails this darkly comic character especially in his featured song number.  The last time I saw Jerald Napoles on stage was a transvestite wearing a tight green gown in PETA's "Care Divas."  In a total turnaround, Jerald plays the tough macho boatman Elias with convincing bravado.

The side characters of Sisa (Angeli Bayani), as well as Don Tiburcio (Tad Tadioan) and Dona Victorina (Ring Antonio), were not really that essential in moving the story forward.  Their songs may have felt like they just needlessly prolonged the running time for those who do not know the book.  But I guess they are by themselves also iconic characters very much identified with the original novel, it would be an injustice if they did not have their own featured song numbers.  I am sure the audience would look for them if they were not there.  I must admit though that the very slow Sisa number was a rather dragging moment during the first act.  The song number of the comic Espadana couple was rather reminiscent of the Thenadiers in "Les Miserables."  The rubber balding headpiece worn by Don Tiburcio was very distracting but funny. 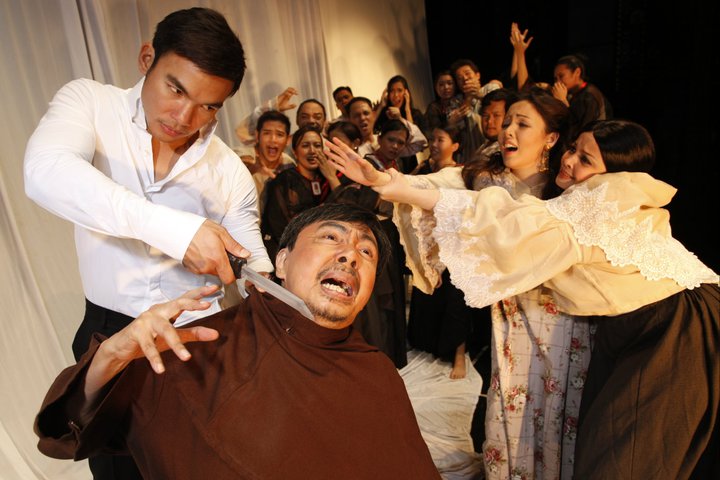 Overall, I enjoyed recollecting my memories about the book as I was watching this musical, and explaining the events to my daughter who had yet no ideas about the story at all.  (The Padre Damaso-Maria Clara connection was a bit sticky to explain to her though.) This musical is really a must-watch for all lovers of Philippine musical theater.  This musical is a must-watch for students of Rizal's novels as seeing the action coming alive makes the story more vital and exciting.  Congratulations to crew of Tanghalang Pilipino for their wonderful production and their box-office success.  Congratulations to the Director and the Cast for being so talented in bringing this challenging piece of musical theater to vibrant life!
Posted by Fred Said at 1:23 AM