"Noli Me Tangere, the Opera" (Dulaang UP) 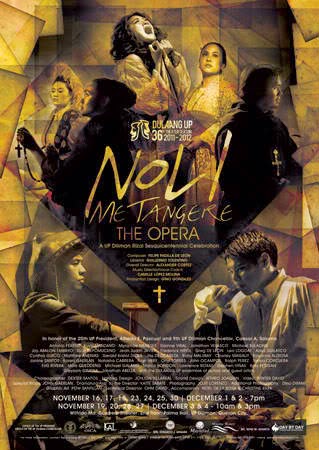 I admit I am intimidated by the prospect of listening to hours of an unfamiliar foreign language in song trying to understand an unfamiliar story.  I have seen the latter half of 'La Boheme" during rehearsals in the CCP before.  I was admiring only the strong vocals of the singers, but I had no idea what was going on really.  This year comes a rare opportunity to witness a full opera in a most familiar language, Tagalog, for a most familiar story, Jose Rizal's "Noli Me Tangere."  I grabbed the chance to watch it with my daughter this morning at the Wilfrido Ma Guerrero Theater in UP Diliman.

The stage looked quite small also for a play of this magnitude and scope.  There were several big and tall pieces of bamboo that lined the back and sides of the stage.  There were also pieces of bamboo that were hanging from the ceiling.  Aside from representing the forest in some scenes, they were also serving as backdrop for some projected images which serve to make the stage more colorful and interesting.  There were also big movable set pieces on center stage serving as risers and walkways for the actors.  The indigenous-looking material used for the costumes were also very innovative.  Congratulations to production designer Gino Gonzales.

The play ran for 2 and a half hours.  We watched the 10am show this morning.  The first half (actually a merger of Acts 1 and 2) ended after about an hour.  This act covered from the events from the arrival of Ibarra up to the part when Ibarra attacks Padre Damaso with a knife.  There was an intermission of about 15 minutes.  Then the last act ended at around 1215pm.  This act covered the events following the excommunication of Ibarra to the deaths of Sisa and Elias.  Most of the dialogues were sung, with only very occasional spoken lines. The composer is National Artist for Music Felipe Padilla de Leon.  The librettist is National Artist for Sculpture Guillermo Tolentino(who is more famous for being the sculptor of the Rizal and Bonifacio Monuments and of course, the UP Oblation).  I am not going to pretend here that I understood each and every word.  There were a lot of lines for which I really did not get all the words being sung.

The leads in this particular staging we caught were all very strong singers.  The central couple of Crisostomo Ibarra and Maria Clara were played by Ivan Niccolo Nery and Myramae Meneses, both from the St. Scholastica School of Music.  As opera singers, they were faultless in their arias, as far as vocal quality is concerned. Although for me, I must admit they did not exactly look right for the parts they played.  Nery was a bit on the hefty side, so his action scenes (especially with the crocodile and with Damaso) looked awkward.  NAMCYA winner Meneses looked and acted more maturely than how we would usually picture Maria Clara.

If we would use the audience applaud during the curtain call as a barometer, the loudest applause was for theater actress Jean Judith Javier (as the tragic Sisa) and her "sons" Gerald Kristof Diola (as Basilio) and cute little Jhiz Deocareza (as Crispin).  The spontaneous applause after the very dramatic vocal solo of Diola upon the death of Sisa was incredible!  Padre Damaso was played by sought-after choral conductor Jonathan Velasco, who returns to the role he sung 24 years ago when this same opera was first staged in the CCP.  He has not sung solo for an opera for 11 years.  His imposing stage presence and deep baritone was perfect for the villainous role. The white face makeup they used to distinguish Spaniard from Filipino characters made him even more scary. Frederick Hipol, formerly of the UP Concert Chorus, played a very intense Elias.

My daughter and I also watched "Noli Me Tangere the Musical" (MY REVIEW) earlier this year, last September.  We both could not help but to compare the two productions since we have watched them so close to each other.  Of course, the musical theater version (complete with pop star Mark Bautista as Ibarra) is more accessible than this opera version, but each theater experience had its own charms and moments for me.  Even if the story was divided into the two acts in exactly the same way, each play emphasized different aspects of the events to fit their genre.  I believe this is a good introduction to the generally intimidating art of opera for the public since the language and the story are very familiar to them.  Do catch "Noli Me Tangere the Opera" during its current run up to December 4, 2011, with shows from Wednesdays to Sundays.  Kudos to overall director Alexander Cortez, musical director Camille Lopez-Molina, and the rest of the Dulaang UP!  Best of all it only costs P250 a ticket!


ACKNOWLEDGEMENT:  Thank you to Ms. Glenda Velasco Liao for the invitation, the poster, the help in reserving tickets and the information about the singers in the cast.
Posted by Fred Said at 2:05 AM