When I heard about this concert several months back, I felt sure I wanted to catch it mainly because it featured my favorite artist in the 1980s:  Howard Jones.  That "Best of Howard Jones" cassette tape was on constant repeat on my car cassette player back then.  Of course, my favorite Howard Jones song, and 80s song for that matter, was definitely "No One is to Blame."  I would watch this concert just to hear Mr. Jones sing that song live. 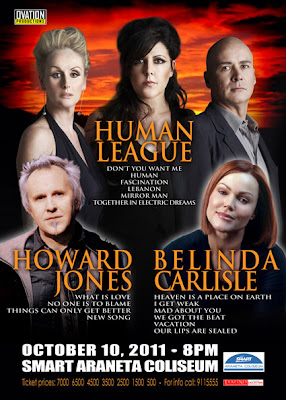 Concert day October 10, 2011 is a Monday.  I met my cousin Jerry in the Gateway Mall and proceeded to the Araneta just before 7:30.  Unlike previous concerts we attended before, there was absolutely no line outside the venue.  The Upper Box B area was practically still empty and we were able to get great seats right across center stage.  Talk was only 25% of the tickets were sold.  By the time, Belinda Carlisle's name was announced, the cavernous Araneta was still pretty much vacant.

Belinda Carlisle did not bring a band with her, so she was just using a minus-one.  Talk about karaoke night.  No doubt, Ms. Carlisle still looked very good.  Her first song was not too familiar, however, her voice did not sound too good.  She was off key for many lines in that song.  Her next song was a hit song, "I Get Weak"  (VIDEO). She gave this relatively simple song with a repetitive melody a terribly out-of-tune rendition.  Belinda even danced and sang like a drunk!  Fortunately for her fans, her next song "Circle in the Sand" (VIDEO) was so much better.  I hoped she would finally hit her stride.

Her next two songs were by her previous band The Go-Go's:  "My Lips are Sealed" and "We Got the Beat" (VIDEO). There she was alone on that big dark empty stage singing these zesty songs that ideally needed a energetic production and lighting effects, not alas, there was none.  She again sounded a bit off on her last Top 40 hit, "Leave a Light On."  Predictably her Number 1 hit "Heaven is a Place on Earth" was also her last song.  It was a very disappointing first act, to say the least.

Next up was my most awaited artist Howard Jones!  His set made active use of the widescreen behind him with some pretty colorful and psychadelic graphics.  He had a couple of electronic musicians to back him up. The sound quality was awesome.  He was playing new or unfamiliar material, all electronica.  This took a while and the audience tried to be excited, but was obviously getting bored.  It was only on his sixth song that he played and sang something familiar.  To me, it was beloved and my main reason for watching this concert tonight:  "No One is to Blame"  (VIDEO). The rendition was flawless and beautiful.

Howard Jones sang with a very strong voice, effortless on the high notes, as if this was 25 years back.  After that song, this night was already worth it for me.  After that, it was an all-hit parade, just what the audience came here for.  "Everlasting Love," "Life in One Day", "Like to Get to Know You Well," "Things Can Only Get Better" (VIDEO), "What is Love?" (VIDEO) and finally his very first hit song, "A New Song."  A lot of people were up and dancing.  The energy of the place finally up!

The Human League certainly took a long time before they took the stage.  There was probably a loooong 30 minute wait before the restless audience saw them.  It was exciting to see and hear the trio of Philip Oakey, Joanne Catherall and Susan Ann Sulley sing, and they all still looked (although Philip is now totally bald) and sounded great.  They also had a great sounding synth back-up band, as well as awesome graphics on the screen and lighting design.  Again, they sang new or unfamiliar material first.  It was only by the fifth song "The Lebanon" when the audience stirred to life.  Unfortunately, they did not pick up momentum and played a couple more unfamiliar songs.  Then they sang their Number 1 hit "Human" (VIDEO) which had a surprisingly lukewarm reaction, except for Joanne's sultry narration in the bridge.

Then they had a couple more unfamiliar songs.  This felt frustrating!  We bought tickets to a nostalgia concert to hear the HITS!!!  Then, Oakey announced they wanted the audience to sing along, then the hits came:  "(Keep Feeling) Fascination" and finally, their first Number 1 song, and the first Number 1 song using a synthesizer:  "Don't You Want Me" (VIDEO). Everyone was definitely singing along to that one!  They left the stage for a while, but the audience wanted more.  This was already past 11pm.  They came out, but alas, another unfamiliar song.  For their final song, it was another much-awaited Philip Oakey song, a song he recorded with Giorgio Moroder back in 1984, "Together in Electric Dreams" (VIDEO) !  This was a fitting and upbeat close for this night.