At first, I was not so sure I wanted to watch this musical called "SWEET CHARITY".  I was not really familiar with the story nor the songs. I only knew one, which was "Big Spender".  Because of that, I also felt this might be a very dated piece of musical theater being first staged in 1966.  Finally, the tickets to this musical were expensive!  The prices are higher by P500 from the usual prices of Atlantis shows at theRCBC Theater.  However, since I was quite impressed with Nikki Gil playing Elle Woods in "Legally Blonde," I wanted to see how she would do as the lead in "Sweet Charity."  So when I was offered a 10% discount for tickets by The Scalpers (a legit ticket sellers group) for the 8pm show on August 6, I decided we could give it a try. To date, this was the first musical staged by 9 Works Theatrical that I have watched. 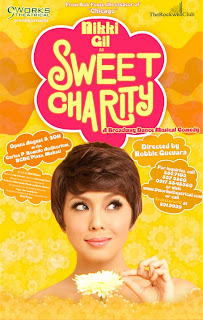 Because of a busy Saturday afternoon at work for me, coupled with some car trouble that necessitated some time at a gas station along the way, we did not make it to the theater on time.  We probably missed the first 20 minutes or so. I later disappointingly discovered that we have actually missed "Big Spender," which was the second song sung!  I realized that the lead character Charity Hope Valentine (Nikki Gil) was a generous, vivacious "dance hall hostess" who was always wishing to get out of her miserable job at the Fandango Ballroom.

Act I was full of very funny situations.  Unexpectedly, I knew another song from the first act "If My Friends Could See Me" sung by Charity as she found herself in the bedroom of famed actor Vittorio Vidal (OJ Mariano).  I also like very much the last song in Act 1, which was"I'm the Bravest Individual" which Charity and Oscar Lindquist (Kris Lawrence) hilariously sung in a stalled elevator.  In Act II, more of Charity's love story with Oscar came into focus.  The most striking number was the first one called "The Rhythm of Life" where Oscar and Charity visit a very colorful hippie "church" led by Daddy Brubeck (also OJ Mariano).  The rest of the songs were less memorable.

Easily the best part of this 9WT Production is none other than Nikki Gil as Charity!  She is flawless as a singer, a dancer and an actress.  She convinces us that she is really a child-like, good-hearted girl in the wrong job, and we root for her to get free from it.  Her New York accent was very natural, not forced and awkward like those of Ciara Sotto and Sheree who played Helene and Carmen respectively, immigrant girls of unknown origin who also dance at the Fandango.  The performance of Nikki captures the innocence, heartbreaks and joie de vivre of Charity Hope Valentine.  Her performance is riveting and real, certainly worth the price of admission.

For the other members of the cast, they do quite well.  OJ Mariano, whom I only knew from TV's "The Singing Bee" was able to play very distinct characters.  His singing as Vittorio Vidal was seriously formal, while as Daddy Brubeck had a rock-edged falsetto (ala Judas in "Jesus Christ Superstar"), very impressive.  Shiela Valderrama-Martinez was striking and effective as the jaded senior (?) dancer Nickie. Sheila was the best-looking among the dance hall girls, even better than the buxom and sexy Sheree.  Kris Lawrence I know was a winner of a TV singing contest. He did the nerdy and nervous tics of his character Oscar very well for a beginner, quite charming most of the time.

It was rather disappointing to see that the seats in the theater were not filled.  I do not remember watching a show in RCBC that was not full before.  This is too bad because the slick sets, sparkly costumes and grand stage lighting effects were all very well done (as you can see in the center photo).  You could see why the tickets were more expensive.  The choreography of Bob Fosse may be rather dated being set in the 1960s, but it was very interesting and amusing to watch the unusual undulations of the dancers. This show has exceeded my modest expectations. Congratulations to Director Robbie Guevarra.  Ms. Nikki Gil, you need to do more musical theater. I have become a big fan!
Posted by Fred Said at 6:49 PM