Next to Normal (Atlantis Productions)

My wife and I had already seen "Next to Normal" on Broadway last year with Marin Mazzie as Diana Goodman, her real-life husband Jason Danieley as Dan and Kyle Dean Massie as Gabe. I had posted my review of that awesome Broadway production HERE. 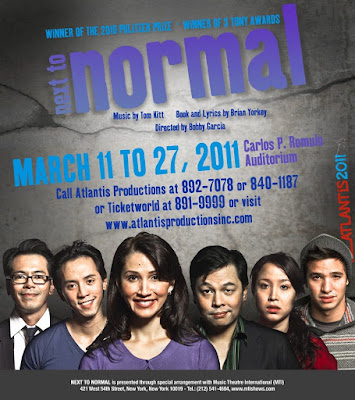 Now comes Atlantis Productions and their staging of "Next to Normal" with a very brief 3-weekend run from March 11-27, 2011.  It was only in the last weekend that we were able to catch this particular local production, which as of now had garnered a lot of good press reviews.  We missed out on Atlantis' "A Little Night Music", but I am very glad we did not miss this one.

I had no expectations that our local production could match the incredibly massive three-tiered metal scaffolding which represented the Goodman house.  It even had a real piano on the second floor!  The local stage at the RCBC Theater is maybe just one third that of the Booth Theater stage.   The set at the RCBC felt cramped and small in comparison.  There was only a second floor and two stairs. There was no room for a real piano for Natalie.   I also did not expect them to exactly recreate the elaborate lighting effects which were essential in the script of this play for the "shock" value.  However, I applaud the set and lighting designer of this Atlantis Production for the good work he did with the limited budget.

I really wanted to see our local actors sink their teeth into this Pulitzer-prize winning book.

Menchu Lauchengco-Yulo, what can I say? This woman is an amazing actress.  I really wanted to see Ms. Menchu do the bizarre sandwich scene at the beginning but we came a bit late for that.  The dramatic ballads are really her forte.  The heavier rock songs in Act 2 may have been out of her comfort zone, but she still nails them with conviction.

I have seen Jett Pangan before in previous Atlantis shows like "Spring Awakening" (REVIEW) and "Legally Blonde" (REVIEW) but this is the first time I actually heard him in a major singing role. And wow, this guy can really sing!  He was the best singer of the show for me. I felt he even conveyed the conflicts in the father role better than Jeff Danieley in the Broadway production.

Felix Rivera played the Goodmans' first child Gabriel. The songs for this character are certainly the most challenging to sing, especially the relentlessly high and energetic "I'm Alive." Kyle Dean Massie absolutely slew these notes during the Broadway show we watched. I think Felix's voice may have been tired or some notes may have been out of his range.  His falsetto last night was not strong enough to rise above the rock orchestral accompaniment and Jett Pangan's rich baritone when they duet.  I know Felix can do much better, I must have caught him on an off-night yesterday.

Bea Garcia played the neglected daughter of the Goodmans, Natalie.  She was the best performer and singer in the lackluster "Spring Awakening" previously, and she holds her own here in a very sad, negative and even petulant role in both the acting and singing departments.  Markki Stroem makes a good enough stage debut as Henry, Natalie's loyal boyfriend.  His singing vocals were still uneven, so luckily he only had a few songs.  But this guy has stage presence.  Jake Macapagal as the psychiatrist Dr. Madden was too smarmy-looking to be convincing in his role.

I really appreciated the songs and script of Act 2 so much better with this second viewing.  I was really drawn into the dramatic moments after the shocking Electro-Convulsive Therapy scenes more now than before.  I was able to listen better to the melody and lyrics of such beautiful songs as "I am the One," "Song of Forgetting" and "How Could I Forget?"  The husband-wife, father-son, mother-daughter scenes at the end had a lot more impact to me here than on Broadway.

In fact, come to think of it, the "limitation" of a smaller stage and simpler effects may have actually contributed positively to the claustrophobic atmosphere of the story.  The intimacy of the Goodman family dynamics may have been lost in the huge Broadway stage, but is captured very well in our local production. Smaller does not always mean weaker.  Congratulations to Director Bobby Garcia, the cast and crew of Atlantis' "Next to Normal"!

Last 4 shows today and tomorrow! Check out this website for sellers of these last 4 shows: http://www.atlantisproductionsinc.com/
Posted by Fred Said at 5:47 PM