If you have been reading my blog, you know that I am an avid concert watcher.  To date though, I have only seen one concert abroad, Elton John in Hong Kong back in 2004.  What I just did yesterday was one of the most impulsive things I have ever done: to go to another country just to watch a concert and come home the very next day!   I did not even stay 24 hours there.   I simply had to do it though.  The Eagles were an act I had always wanted to see perform live.  They skipped Manila on this tour, so the next best thing:  Singapore! When I decided to buy last month, there were only tickets for seats BEHIND the stage. Nevertheless, I still went for it! 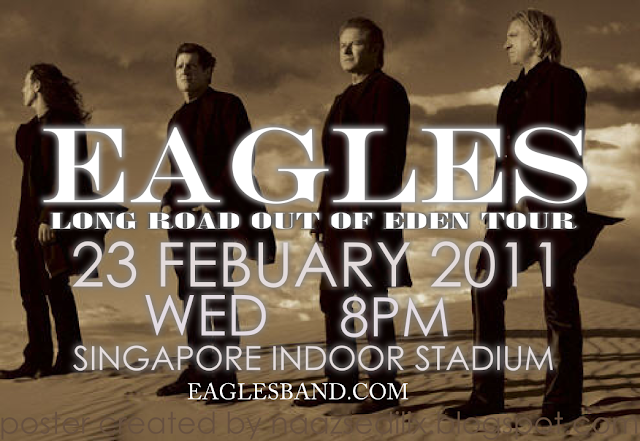 After an unexpectedly soaking wet afternoon joining a history tour, I had to freshen up and eat a quick dinner before heading over to the Singapore Indoor Stadium. I was running late and it was my very first time to go there. Luckily it was very near to the Stadium MRT Station on the Orange Circle Line.  And wow, the place was really huge and teeming with activity outside.  It was about 15 minutes past 8:00 pm.  When I got in, I was distressed to find out that the concert actually started on time!

When I finally got inside the cavernous amphitheater, it was practically full already.  The venue looks amazing!  I believe I have already missed two songs, both from the new album they were promoting for this tour, "Long Road Out of Eden".  Timothy B. Schmit was just taking the mike to sing his song from the new album, "I Don't Want To Hear No More." 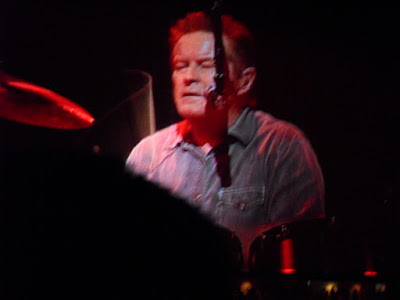 Don Henley played the drums as he powerfully sang their first classic song, "Hotel California". I cannot describe the goosebump-y feeling I had while listening to this iconic rock classic actually being sung in front of me.  Just to hear that legendary song, and the equally classic guitar duet at the end by Joe Walsh and the other talented guitarist (whose name escapes me now), made this whole trip and concert already worth all the effort!

Glenn Frey then took to the mike to sing another classic song, "Peaceful Easy Feeling", and then, Schmidt again with "I Can't Tell You Why."  Very emotional and smooth delivery and harmonies.  Very nice.

After that, I already went to look for my seat while Don Henley was singing "Witchy Woman." The seat was behind the stage to the left side, but right in front of me was the big screen, although the images were reversed.  Not bad at all. 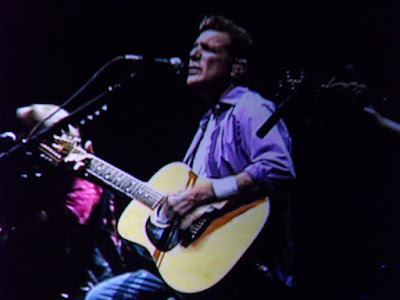 Then, it was Glenn Frey again with "Lyin' Eyes".  The country rock vibe is very infectious, you do get the feeling this whole stadium was one big honky-tonk.  The next song is exciting as Don Henley sang his own solo hit "The Boys of Summer".  Boy, that guy has some strong pipes, undiminished by age.  Joe Walsh then got his spotlight singing "In The City" with his trademark fancy guitar work.  They ended the first half of the concert singing "The Long Run".

This was followed by a 15 minute break, so the audience could rest (according to Don). He promised they would sing "everything they know" in the second set.

The second half opened the four guys sitting on stools like we saw them in "Hell Freezes Over" videos.  They regaled us with a display of amazing a capella harmony in the poetic "No More Walks in the Wood." Beautiful.  Then came two more moody songs from the new album,"Waiting in the Weeds" (solo by Don Henley) and "No More Cloudy Days" (solo by Glenn Frey).  Although, I was not familiar with them too much, but they had that classic Eagles vibe that never faded.  Timothy B. Schmit then sang his popular relatively recent hit "Love Will Keep Us Alive".  I am sure if it was here in Manila, the whole audience would be singing along to that song! 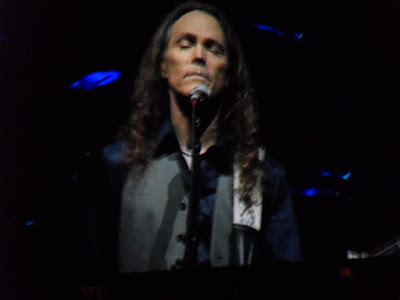 Don Henley then introduced and sang their first Number One Hot 100 hit, "Best of My Love".  After that Glenn Frey introduced their first million seller, and the song their wives called the "Credit Card" song, "Take It To The Limit".  Then the band launched into what may be their new "Hotel California," the title track of their 2CD album "Long Road Out of Eden". It had the same ingredients:  epic imagery, bluesy rhythm, excellent vocal harmony and long playing time.  Joe Walsh again took the mike and burned his guitar strings in a cover of a hit from Walsh's other band James Gang called "Walk Away."  This was followed by another Number 1 song, "One of These Nights."

After that, Glenn Frey introduced all the band members one by one.  It was great to hear them describe one another as friends and acknowledging each other's talents.  Glenn's sense of humor was evident when he called his hometown Detroit as the place where "'mother' is just half a word." LOL!  By this time, it was already 1045pm, and it was clear that the concert was just getting warmed up!  Joe Walsh was singing another James Gang cover "Life's Been Good". Looks like he had a little to drink by then, haha!  And so did the audience, who can actually buy beer from the lobby and bring it into the stadium, and were now up, getting rowdier and dancing. 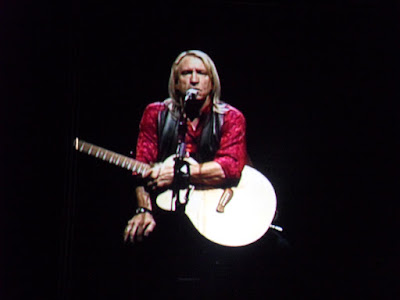 Unfortunately, I had bought the wrong tickets for my flight home, and had to be at the airport by midnight.  I always thought I bought a 1:30 PM ticket, but only realized a day before I left that I actually had a 1:30 AM ticket!  The last MRT to the Changi Airport was 11:30pm.  With all the train transfers (I had to transfer trains 3 times) and a bus shuttle I had to catch to get from Terminal 2 to the Budget Terminal,  I knew I really had to get going already.

Disappointed as I was to be leaving with the show unfinished, and not to hear my favorite Eagles hit "New Kid in Town," the whole show was really very, very good and worth my impulsive whirlwind trip.  The four Eagles are obviously looking much older than when they first started creating music 30 years ago.  But their vocals and harmonies were still as vibrant, and their musicianship as sure as ever.  Their new songs show that their topnotch songwriting skills are still very much there. If they were going to play in Manila in the future, I will definitely go watch them again. 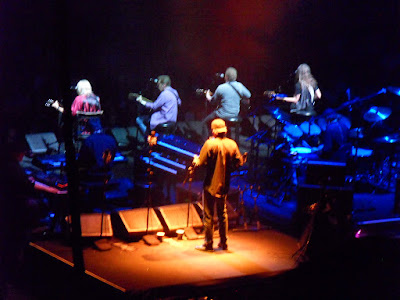 View from the Back where I was Seated

According to this web page, after I left the concert, the Eagles went on to sing four more songs, including "Dirty Laundry" and their last Number 1 song back in 1980, "Heartache Tonight" in the regular set, and three more songs in their encore set, including "Take It Easy" and their final song "Desperado."  So they never did sing "New Kid in Town."  It was only one of their five number one songs they did not sing tonight.  Another reason to see them again if there is a chance.