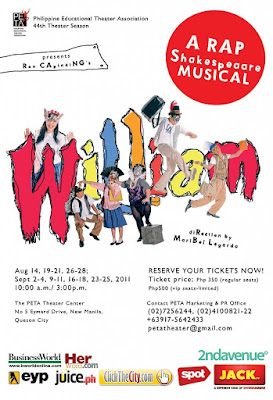 The Philippine Educational Theater Association offers for its 44th theater season an original Filipino musical simply entitled "WILLIAM." However, this musical written by Ron Capinding is anything but simple.  It tries to make the formidable works of William Shakespeare accessible to the ordinary Filipino high school student.  Incorporated into the story are innovative hip-hop songs composed by Jeff Hernandez with funky R and B grooves which further adds to the youthful appeal.

The story centers around a group of five third year high school students.  Richard is the Junior class representative who lives with a forbidden admiration.  Stella is a bookish honor student whose mom has taken up with another man while working in London.  Sophia is a girl from Tondo family to suddenly hit the big time when her dad won the Lotto.  TJ is the jock who was constantly at odds with his violent dad.  Erwin is the all-too-familiar shy guy who seemed content just to blend into the walls.

Their class adviser Ms. Lutgarda Martinez gave her English class an assignment about William Shakespeare and his significance.  Predictably, the students cannot relate and come up with dismal reports.  Disappointed, the teacher challenges them more by making them act out a scene from a Shakespeare play.  While rehearsing a scene from "Romeo and Juliet," secret longings were revealed which lead to fights among the group members. To diffuse the tension, teacher changes her assignment and asks the students to instead act out a solo monologue that relates to their personal life.

The play is dedicated to high school students so the plotting and language is expectedly juvenile.  However, it does not mean that adults will not gain any insight out of this.  The problems tackled were real and familiar, and most of the audience will be able to identify with one or more of the characters and relate with their Shakespearean epiphany at the end. The music and rap songs were also fun and had some very interesting word play.  The response from the predominantly young audience was quite rousing, particularly during the cute romantic moments involving the kids in the cast.

The young cast playing the five main kids and the chorus were all unknown but that was a charm in itself.  The best was John Moran, the actor playing Richard, who delivered his Shylock soliloquy about revenge with so much passion that it evoked spontaneous applause. Ian Segarra, the guy who played Erwin, had a more slow burn character development which peaked in that unexpectedly strong delivery of that Marc Anthony speech during the school election day to break out of his timid shell.  J-mee Katanyag, the girl who played Sophia, is very cute and very natural in her delivery of her Juliet speech and the whole play in general.  It was as if she was not acting at all.

I had a little problem with Norbs Portales, the boy who played the jock TJ, whom I felt unfortunately had a physical disconnect with this role.  His body build and look did not really jive with the character he was supposed to portray.  His delivery of his apology monologue fromHamlet did not seem sincere. Richard even stole the limelight in that scene with his meaningful red Angry Birds t-shirt alone.

In the looks department, the girls in the audience seemed to squeal more for that one guy in the chorus (Cheeno Macaraig) that they did for TJ.  Anj Heruela, the girl who played Estella was also a bit stiff in the acting department as maybe her character required.  Her big Portia speech about mercy was the last monologue of the play, but it was a bit anti-climactic as the speech was not very familiar and her delivery was not very convincing.  She did quite well in her "kilig" scenes when she was being teased about her crush though.

I only know one actress in the cast and that is Ms. Meann Espinosa from the PETA Marketing Department. This is the first time I have seen her onstage and it is a central role to boot!  She goes to town playing the indefatigable English teacher Ms. Martinez.  She's got the nasal accent, the mannerisms, the hair all down.  She was also able to convey her love and understanding of Shakespeare very well.

There was also that innovation of having one actor play the fathers of the kids (each with his own local accent and behavior).  The actor who played these father roles, Jojo Atienza, was excellent in his multiple portrayals.  Kudos!

Overall, "William" is another excellent addition to PETA's roster of plays and musicals that cater to the educational needs of the Filipino youth.  Congratulations to the director Ms. Maribel Legarda, who is still fresh from the critical and box-office triumph of "Care Divas". Parental guidance is required for very young kids because of some scenes depicting violence and mild expletives.

This musical play is a perfect prelude to the next PETA production slated in January 2012 as it takes on the Filipino version of the Shakespearean tragedy"Haring Lear," as translated by National Artist for Literature Bienvenido Lumbera.