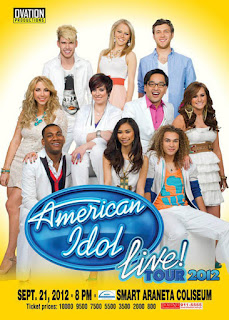 We reached the Araneta Coliseum early enough, about 630pm, or so I thought.  We entered the new and improved Green Gate with the new facade.  When we got inside, the lobby was so much brighter and cleaner ambience-wise compared to the lobby we remember, and that was great.  When we got to the second floor though, it was still the same.

Anyway, it turned out, people had already been falling in lines to enter the Upper Box Areas, both for the reserved seat of Section A, and the unreserved seats of Section B.  The rehearsals were still ongoing inside the theater and so they were not letting people enter the auditorium proper yet.  It was already a little past 7pm when the doors were finally opened, and as predicted people surged in and scrambled to their seats.

The people still had to wait another antsy full hour or so before the concert began.  The audience was quite diverse that night.  My daughter and I were seated in an area where in front of us was a gaggle of senior citizen matrons on a night out, while in the row above us was a group of what seemed to be English-speaking beer-guzzling exclusive school graduates.

It was almost 845 when Ryan Seacrest appeared on the big screens to announce the beginning of the show.  There was a pandemonium of screams when the lights were dimmed and the auditorium became a sea of multi-colored glow sticks.

The initial VTR introducing the current group of Idols was shown.  Instantly you knew something was was wrong with the huge LCD screen backdrop as there was an entire square section in the upper left section that was not working and was black.  During the intro, you cannot see the whole face of the Idol being introduced, but that did not stop the rabid fans from screaming for their favorites. Even that early you knew who were the most popular idols -- Colton, Phillip, and of course, Jessica!

The LCD screen problem continued to distract for the most part of the first act.  The technicians would try to fill the gap by fitting in patterns from another section of the screen, but it was obvious the patterns were not correct, but better than when it was just black.

The show opened with the top 9 (except Phillip) singing "Sing" (My Chemical Romance). This opening song would actually set the trend for the entire first act, song choices were familiar not the really big hits, a little underwhelming.  I mean, like Deandre sang "Master Blaster," Skylar and Hollie dueted on "Undo It" (Carrie Underwood), Erika sang Pink's "Glitter in the Sky" (in a fantastic restrained performance with her new pink hair!) (VIDEO).  Things livened up when Colton, Erika, Jordan and Hollie did "Moves Like Jagger."

Next up was Heejun with John Legend's "Green Light" in a rather weak performance, followed by his cheesy rendition of LMFAO's "Party Rock Anthem" with Deandre and Jessica.  Then the boys sang "Everybody Talks" by Neon Trees before giving way to Elise and her two songs Led Zep's "Whole Lotta Love" and Adele's "Rumor Has It."  Elise was very good in these rocking songs, but she was not exactly connecting with the audience too much.

When Colton Dixon came out, the females in the audience went wild with their screaming! His version of Switchfoot's "Meant to Live" started shakily but ended OK.  He then introduced his upcoming single "Never Gone," though the melody did not really stick with me.  He had a big moment though when he sat behind the piano and sang Billy Joel's "Piano Man" (VIDEO).  His voice was rather high-pitched than solid, but it was a very moving performance of the song.  The LCD screen suddenly worked properly at this point to the delight of the audience, but temporary only as it bogged down again after a while.

After that the Top 9 (still without Phillip) came out to sing a medley of Bruno Mars' "Just the Way You Are" and One Direction's "What Makes You Beautiful."  It was as corny as the numbers we see on TV but the young audience was buying it.  When Colton came out wearing a white tank-top, he looked like a skinny white ghost in the bright stage lights, but hey, his fangirls still screamed so loudly to greet his entrance.

Then Ryan Seacrest again appeared on the big screen to announce an intermission. The gap lasted more than 20 minutes.

When the lights dimmed for the Act 2, the LCD screen was already working properly!  And the audience screamed with anticipation when the picture of a smiling Jessica Sanchez appeared on the screen!  She had a grander entrance than anyone else at that point, framed by silvery crystals.  She came out wearing a glittery black outfit singing Beyonce's "Best Thing I Never Had" (VIDEO).  Then she sang her version of Prince's "How Come You Don't Call Me Anymore" (VIDEO) with Deandre and Joshua singing and dancing backup.  The three of them then segued into a rocking version of Ike and Tina Turner's "Proud Mary",  You should hear the audience scream when Jessica growled!  They love it.

Next up was Skylar Laine, who was surprisingly had local fans despite being very country.  She sang a couple of country rock songs "Gunpowder and Lace" (Miranda Lambert) and "Stay with Me" (The Faces).  Sweet Hollie Cavanagh was next as she entered to the opening beats of Adele's "Rolling in the Deep" (backed up by Elise and Erika).  Her next song was Demi Lovato's "Give Your Heart a Break."  Just two solo numbers for these two girls, while lower-ranked Colton had 3!  You know who is really popular, huh?

Third placer Joshua Ledet sang Bruno Mars retro hit "Runaway Baby" and his vocal showcase James Brown's "It's a Man's Man's Man's World."  Jessica joined him for his third song "I Knew You Were Waiting For Me" (VIDEO). This guy really has strong vocal chops. His style though is really retro, and not current at all.

We were then brought back to the night of the AI finale.  The screens then showed Ryan Seacrest again when he was announcing the winner.  The girls in the audience again screamed in anticipation.  They knew Phillip Phillips was next!

Phillip was just wearing a drab olive t-shirt.  He went through his four songs in his true WGWG style with his signature spastic dance moves. His fangirls loved it.  He sang Stevie Wonder's "Superstition" first, then his version of Usher's "Nice and Slow".  Two duets came next, Gotye's "Somebody That I Used to Know" with Elyse (VIDEO), then Damien Rice's haunting "Volcano" with Jessica (VIDEO).  All in all it was a solid set, but Phillips was really just always stuck to one spot while singing.  No movement at all.  Of course, he ended his set with his coronation song and first single "Home" (VIDEO). He was first backed up by Colton and Deandre, then the rest of the other Idols joined in singing the anthemic chorus.

This led to the finale number (VIDEO) where the girls started singing Pink's "Raise Your Glass", then the boys countered with The Wanted's "Glad You Came."  Phil looked geekily awkward in the group number, changing into a white t-shirt this time to be coordinated with the rest of the Idols.  I am sure he was thankful he did not have to dance in any of the other group numbers in Act 1, haha!  That was it after that fun song.  Ryan Seacrest appeared on screen again and finally bid everyone goodbye.

So, another AI tour ends.  This is the last show of their tour, and their only date in Asia.  I cannot help but feel many in the audience were disappointed that Jessica would not sing any of her big diva ballads that she sang on TV.  No Whitney Houston. No "And I Am Telling You." I am pretty sure those senior ladies seated in front of us were waiting precisely for those songs.  Anyhow, 30 songs were performed, no joke!  The second act was much better than the spotty first act.  All in all though, it was a very young fun night!