When I first saw the list of performers for this most special concert event, it was veritably the who's who in the Philippine music industry from past to present.  This really promised to be a grand event that will rarely be seen in our country as it succeeds in removing the company lines that divide the entertainment industry, uniting artists of both sides. I am looking forward to duets and production numbers from artists whom heretofore have never performed together before.  As a blogger, I was lucky to receive an invitation from Mr. Ferdie Bondoy of Tatak Digitista to watch this concert as a member of the press. 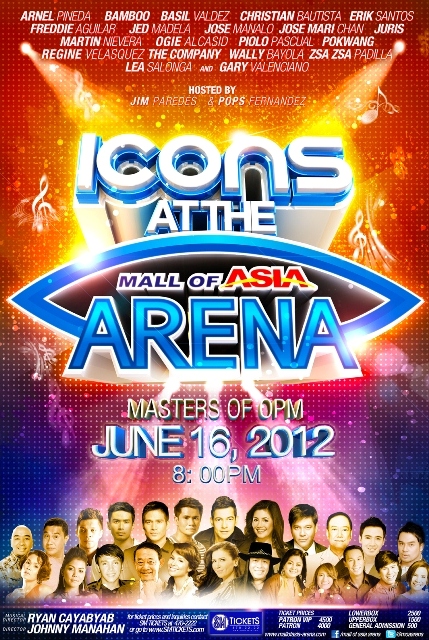 The show started quite late, way past the 8pm indicated in the ticket. It was almost 9pm when a VTR began to play on the big white sheet that covered the front of the stage.  Mr. Ryan Cayabyab and the ABS-CBN Philharmonic Orchestra began to play beautiful Filipino pop music. After their overture, Pops Fernandez (oddly still called the "Concert Queen") and Jim Paredes as the masters of ceremony.  They introduced each of the performances, as well as the special features of the SM MoA Arena as a concert venue.

The first number was a tribute to Jose Mari Chan done by The Company, Christian Bautista and Mr. Jose Mari Chan himself (VIDEO).  Mr. Chan is the epitome of cool when he sings. Only he can sing "Beautiful Girl" and not sound cheesy.  This was followed by a set of diva songs written by Louie Ocampo rendered by Ms. Rachel Alejandro, Dulce and Verni Varga.  Ms. Dulce really has very strong pipes!  Ms. Rachel and Ms. Verni more than held their own in the belting department.  This was one of the best numbers of the whole concert in my opinion.

Next up was a solo spot for an undeniable OPM icon, Mr. Freddie Aguilar.  We all recognized the introductory guitar riff before he launched into his signature song "Anak." Watching him sing this classic song live is a true iconic moment in this concert.

The next number was a set of songs used in ABS-CBN soap operas written by Ogie Alcasid. These were the theme to "Walang Hanggan" sung by Richard Poon, the theme to "Binondo Girl" sung by Juris, and the theme to "Lobo" sung by Jed Madela. I did not know any of these songs, but fortunately, they saved the most familiar song for last, "Kailangan Kita" sung by Piolo Pascual.  Piolo received the loudest screams of the whole concert!

Ogie Alcasid himself and his wife Regine Velasquez came out next to sing duets of more of his classic songs (VIDEO).  I must say that Ogie really wrote a lot of these great sounding Filipino love songs and he sings very well live as well.  Regine looked so different from when I last saw her in person more than 10 years ago.  She was still able to hit all the killer notes as expected, even though she seemed sort of distracted and not fully in the mood of the concert.

To give the audience a break from the big serious ballads, out came Jose Manalo, Wally Bayola and Pokwang.  They had some pretty funny irreverent spoofs about Mommy Dionisia, Willie Revillame, Gary Valenciano and Martin Nievera.  Hilarious!

Then the concert goes on to more song numbers.  Next up was Bamboo who sang his patriotic rock song "NoyPi", unusually accompanied by the jazzy G-Force Dancers.  Following that solo number came a pair of internationally-acclaimed singers, Arnel Pineda and Lea Salonga, who sang some English-language OPM songs.  It was an unlikely pairing, wasn't it?  Arnel seemed nervous and made a mistake on his very first line of a classic Ric Segreto song! As expected, Lea was pitch perfect and crystal clear as always.

The next set were love songs written by George Canseco, Willy Cruz and Ryan Cayabyab.  This was rendered by Erik Santos, Martin Nievera, and the artist I was most looking forward to seeing live, Basil Valdez.  The number was very well-arranged, but I think they should have given cool-voiced Mr. Valdez a solo spot, instead of letting him sing with very bombastic belters like Erik and Martin.


The emcees introduced Mr. Hans Sy, the President of SM Prime Holdings, to deliver a message from the SM Group of Companies. He acknoledged the presence of VIPs in the audience which included Vice President Jejomar Binay and Pasay Mayor Antonio Calixto, among others.  He said, "We are very happy to be here at this landmark occasion as the MOA Arena is a testament to the Filipino people and its spirit -- resilient and persevering in the pursuit of excellence."  This was basically a Father's Day tribute to his father Henry Sy Sr., whom he called "Tatang". This was followed by a music video about the Sy patriarch with a beautiful original song sung by no less than Mr. Gary Valenciano.

All the singers who performed tonight, including Pops and Jim, came back out on stage to sing the finale number, "The Impossible Dream"  (VIDEO).  After that song, blue confetti flew out on stage and on the audience, filling the whole Concert Bowl, as the auditorium is called.  The singers exited the stage singing "Kay Ganda ng Ating Musika" and then this special concert event was over, and the MoA Arena is formally launched.

Mr. Hans Sy said that through the Mall of Asia Arena, they hope to give the Filipinos "a taste of world-class entertainment in a truly innovative and luxurious setting," staying true to its vision of Changing the Game, Elevating Entertainment.