I was fortunate to have been invited to a special staging of a play written, directed and starred in by Atty. Vincent Tanada.  This special limited two-day run (from Sept 19 and 20, 2012) was spurred by the recent victory of this play entitled "Ang Bangkay" ("The Corpse") at the prestigious Carlos Palanca Memorial Awards for Literature, First Prize in the category for full length play. 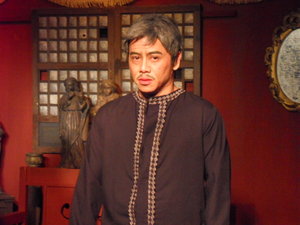 The other better known plays by Atty. Vince and PhilStagers, like "Enzo Santo," "Ako si Ninoy,""Cory ng EDSA" and their latest one "Joe." In total stark contrast, this play is dark, sinister and morbid as its title, "Ang Bangkay."  A play like this can only be staged in an intimate theater venue, not a big auditorium. Tonight's show was held in the PhilStagers home studio in Sampaloc, which seats only a maximum of 70 people.  And while his previous plays were geared to student audiences, this one is strictly for adults only for its "high level of violence, sex scenes and coarse language."

When I arrived at the venue at show time of 7pm, things were running very late.  The PhilStagers cast and crew had just come from an unexpected "emergency" showing of their fun and rollicking "Joe" at 3pm in Pasig.  Now they had to internalize a totally different set of characters for a play with a totally different and darker mood.  This was going to be very tough for them.

"Ang Bangkay" is set in a small town in Pangasinan in the turn of the century 1900.  First-class undertaker Señor Segismundo (Vince Tanada) of Funeraria Corintho had just lost his wife Milagros.  He ruled over his 25-year old virgin daughter Isabel (Monique Azzereda) with an iron fist, literally tying her down to her bed.  The two servants of his household, the serious senior Meding (Glory Ann Nacional) and the lusty junior Oryang (Cindy Maree Liper), were constantly cowed and terrorized by his tempestuous temper.  When his poor assistant undertaker Limuel (Jordan Ladra) asked the Señor for a big favor, the wheels were set in motion for a most scandalous and diabolical series of shocking events ever portrayed in Philippine theater.

The level of intensity in the acting of the five members of this talented cast was non-stop from beginning to end.  They gave it their all, with no inhibitions whatsoever for whatever the scenes called for.  They were all totally immersed in their characters.  There was no indication whatsoever that they just came from an afternoon of singing and dancing in a happy rock musical.  Atty. Vince simply commanded the stage whenever he was on. Glory Ann's acting was haunting and totally possessed.  Cindy was able to handle funny and crazy with riveting charisma.  That final scene of beautiful Monique must just be so draining on her emotions.  Jordan held his own despite his limited stage time.

The gestures and facial expressions were inspired by Greek drama in its latitude, very broad and loud. The text of the script was exceptionally deep and rich Tagalog. The dim lighting, period costumes, Gothic hair and make-up, macabre music and eerie sound effects all added to the total somber mood. The atmosphere was solemn and serious with capital S's.  The audience was totally quiet and absorbed while the unsettling story unfolded in front of them in close-up detail.

Atty. Vince shared in a post-show Q&A session that he wrote this to prove to a critic that he is more than just a writer of light-hearted musicals involving historical Filipino personalities. "Ang Bangkay" certainly takes us to the very dark side of Atty. Vince. There was nothing light and breezy about this play at all.  This is not for the weak of heart or delicate constitution.  This is a play that Atty. Vince himself calls "cruel and merciless."  I fully agree. You will not forget it once you have seen it.  Watch this at your own risk, and you should.