James Ingram Live in Manila: The Malfunctioning Mic Let Us Down!

I must confess.  When I learned that Ms. Lea Salonga was going to be guest singer in James Ingram's concert, that was when I decided that this would be the ideal Valentine's gift to my wife.  I bought these tickets exactly on Valentine's Day and got seats near the side of the stage already, but in a reserved section since this would be a night where we would probably be late to arrive at the venue. 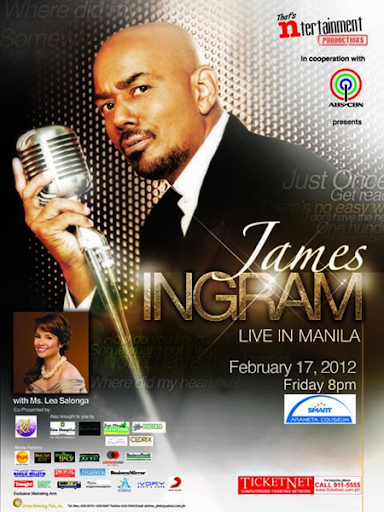 That assumption was right.  Traffic was bad enough that we reached the Coliseum well after 8pm. Fortunately, it was still the front act performing when we arrived.  It was an oldies vocal group which I did not catch the name at all.

By about 9pm, Ms. Lea Salonga walked out on stage  in shiny gold & black gown to sing Bette Midler's "From a Distance."  In her spiel, she confessed she was "kilig" about singing with Ingram, that his voice sounded exactly as it did back in the 80s.  Her second and last solo song was Barry Manilow's "When October Goes."  That song was hauntingly and beautifully sung as only Lea can (VIDEO).

After about five to ten minutes after Lea exited, the lights came on again and the band started to play. I recognized the tune as Outkast's "The Way You Move."  The back-up singers sure were hefty ladies!  After that warm up, an emcee can on stage and introduced James Ingram!  He came out in a bright blue-green suit and greeted the audience.  He then went right into his first song, "One Hundred Ways."  As early as this first song, we already noticed something was wrong with Ingram's microphone. as James' voice kept on dropping off at certain parts.

He then sang  "There's No Easy Way" and "She Loves Me."  He shared that he wrote music for Michael Jackson, then he sang "P.Y.T."  One of the big backup ladies stepped out on stage to duet with James the song he originally recorded with Ms. Patti Austin, the Number One hit "Baby Come to Me."  His next song was what I felt was one of his best vocal performances of the night, "The Secret Garden" (which he originally recorded with Quincy Jones, Barry White, El DeBarge and Al B. Sure!) (VIDEO).  He then sang a couple more of his big hits "Whatever We Imagine" and then his only Number One solo hit "I Don't Have the Heart."

After these, he introduced Ms. Lea Salonga to sing with him the next song, which turned out to be "Somewhere Out There" (which James originally sang with Linda Ronstadt). As you can see in the video, it was a beautiful vocal performance from the two stars, and the audience loved it. When Lea exited, James was really getting frustrated with his microphone which had been cracking and dropping the whole night.  Unfortunately, that was when he was going to sing the song the audience had been waiting for the whole night, the signature hit, "Just Once."  He actually had to change mics midway through the song multiple times, all with problems.  Really terrible.  I would even call it a disaster.  I was really expecting James, being the professional, to sing the song all over again, but alas, it was not to be.

From there, the concert was anti-climactic.  The backup crew sang James the Birthday Song as it was his birthday (today?), but I did not really feel that much audience participation. He sang the beautiful "How Do You Keep the Music Playing?" (also originally recorded with Patti Austin) with another one of his healthy backup singers, but the mic sound quality was really so poor and several times we could not hear them as their mics both were malfunctioning. Very bad and disappointing though they were both trying their best.  He then sang "My Cherie Amour" and "Signed Sealed Delivered".  I must say that his intro (about how he met his wife and mother of their 6 kids back in 10th grade) was more memorable than the songs.

I do not know why the audience response to "Yah Mo B There" was so weak.  I do not hear people singing along when Ingram was asking them to. They did not seem to laugh when James was trying to copy the voice of his duet partner in the recording, Michael McDonald.  And that song's extro was even prolonged so much!  The final song was James' version of Nat King Cole standard "For All We Know."  In a very long extended ending sequence which could have lasted for 15 minutes or more, James went down the stage and slowly walked among the audience in the orchestra section where he shook hands and gamely posed for pictures.

That was it after that.  No song was re-sung.  No encore numbers.  Overall it was a bit of a letdown for me because of the mic sound issues and the rather strange arrangement of setlist, ending with songs that did not resonate too well with the audience. James Ingram himself looked and moved quite oddly as you can note in the videos.  He seemed to be awkward, shuffling more than walking, and even looking drunk at times.  Despite the mic issues though, you know his voice is as strong as ever.  His love songs really endured the test of time and it was certainly good to reminisce them.  Too bad that technical problems had to ruin the songs and the mood.