"Jekyll and Hyde" was a 1997 Broadway musical based on a novella by Robert Louis Stevenson. The music is by Frank Wildhorn and the lyrics and book are by Leslie Bricusse.  I was very excited to finally get to watch an actual stage production of this musical since I was introduced to a lot of its songs during a mini-concert we staged at work almost eight years ago.  "This is the Moment," "Someone Like You," "In His Eyes," "Take Me as I Am" are all beautiful songs, and I was eager to see how they were used telling the story. 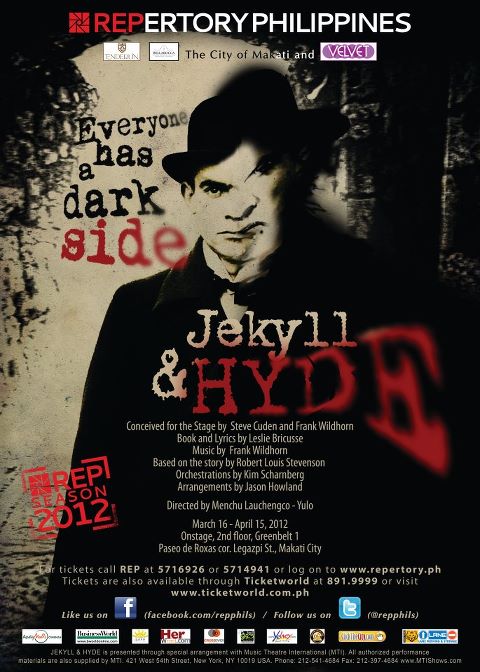 The story is about the duality of human nature:  the good and the evil.  Dr. Henry Jekyll was developing a serum called HJ7 which could separate the evil from the good.  The patrons at the St. Jude Hospital all mock and reject his research proposal.   This pushes the good doctor to try out the formula on himself, with deadly results.  Caught in Dr. Jekyll's morality dilemma are two contrasting women:  the virtuous society lady Emma Carew and the loose bar girl Lucy Harris, both of whom fall for the two sides of the man.

I was fortunate to have caught Jett Pangan as Jekyll/Hyde on the 3pm show yesterday afternoon.  He was the Jekyll I wanted to see since the cast was announced last December (the alternate is Michael Williams). From a sluggish start, with a rather weak version of "I Need to Know," Jett steadily gained momentum as the play progressed.  He was especially sinisterly good as Edward Hyde!  His centerpiece song "This is the Moment" was strong and masterful.  His "Alive" was very powerfully sung.  His sensual duet with Lucy "Dangerous Game" was very steamy.  His final song, "Confrontation,"where he would alternately shift from Jekyll to Hyde was an amazing tour-de-force performance, worth the price of admission by itself.

Kalila Aguilos was a revelation as the unfortunate wench Lucy Harris.  I don't think I have seen her in other plays before but she certainly makes her mark in a major way here.  Her earthy sensuality in slinky and sexy songs like "Bring on the Men" and especially"Dangerous Game" was so palpable!  It was just too bad that the staging of "Someone Like You" was not very imaginative, which was rather disappointing.

Jekyll's betrothed Emma Carew was played in this show by Tricia Jimenez.  Her soprano was very strong and crystal-clear ( as I had heard her sing as Mary in "Song of Joseph" before), but I felt she was miscast, as she looked too mature to be Emma, and had no chemistry with Jett Pangan.  I am imagining that her alternate Cris Villonco would have been the ideal Emma.  I must say though that the duet of Emma and Lucy "In His Eyes" was perfectly realized, with the ideal juxtaposition of the contrasting vocal styles of Ms. Aguilos and Ms. Jimenez.

It had also been well-publicized that this show would welcome back on the Repertory stage Mr. Junix Inocian.  Mr. Inocian was a constant presence in Rep productions back in the day until he was hired in the original cast of Ms. Saigon in 1989.  His role as John Utterson, Jekyll's attorney and best friend was not really too showy but his voice really stood out in the amazing quartet arrangement of "His Work and Nothing More," another favorite song of mine in the play.

The stage design, rich costumes and blocking were very effective and dramatic.  The lighting effects, especially important in delineating the duality of character in Jekyll and Hyde, were very well-done.  Congratulations to the director Ms. Menchu Lauchengco for successfully bringing this to life.