My recap of Game of Thrones Season 2 Episode 1 and 2 are posted HERE.

This episode is a departure from all other episodes of Game of Thrones we have seen before.  There is only one setting, and that is King's Landing.  We do not see the Starks' story nor the Danaerys' story here, it is just the Lannisters vs. Baratheon at war.

The whole season was building up to this episode and yes, it was really well-staged and executed for the TV screen.  As expected, the depiction of battle violence was brutal.  The scene of the Wildfire being used to blow up a ship was spectacular. 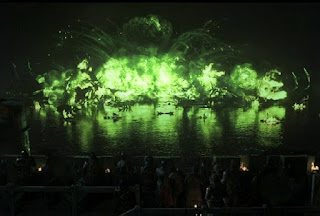 The raucous scenes of battle were balanced with quiet scenes of dread and tension within the walls of the palace with the women, including Cersei, Sansa and Shae.  A soldier was there with them to kill these women in case rape by the enemy was imminent.  Cersei already had her vial of poison ready for her and her youngest son in case the worst case scenario becomes true.

When Kings Landing was being overrun by the forces of Stannis, King Joffrey obeyed his mom and went scampering back into the safety of the palace.  The Hound suddenly had cold feet and also drew himself out of the battle arena.  Tyrion valiantly led the fight, but was treacherously slashed on the face by one of Joffrey's own soldiers.  However, before the Dwarf lost consciousness, he saw the entry of Tywin Lannister and his army.  The Lannister patriarch was finally able to contain Stannis troops and saves Kings Landing.

As the final episode of the season, we are again brought to the different locales in order to get an idea of how all the other characters are before the season ends.

We see that Tyrion survived the face slashing he had on the battlefield in the last episode.  But he had been hidden away from the rest of Kings Landing, and had been demoted as the Hand of the King.  Joffrey bestows that position to his grandfather and savior of Kings Landing, Tywin Lannister.  Ser Loras Tyrel (the boyfriend of the assassinated Renle Baratheon), who aided Sir Tywin in securing Kings Landing was also given an opportunity to request for a reward.  He recommends his sister Margaery to King Joffrey as wife.  Joffrey thought of his betrothal to Sansa Stark, but his mother Cersei erases any doubt that Margaery is the better choice.  Sansa seemed relieved, but hesitates when Petyr Baelish offered to help her return to Winterfell.

Elsewhere, Brienne kills three Northerners who threatens her mission to bring Jamie Lannister to Kings Landing.  She clears that she is not pro-Stark, but her loyalty is to Catelyn Stark herself. Speaking of Catelyn Stark, she explains to her son Robb about his promised marriage to a daughter of Walder Frey.  Despite this talk though, we see in the next scene that Robb follows his heart and secretly marries the battlefield medic Lady Talisa instead.

Stannis Baratheon was able to escape the Lannisters and return to his camp.  He was very angry with the Scarlet Witch Mellissandre, whom he almost strangles to death.  However, she still manages to calm him down, and aids him to see an apparently inspiring vision in the flames of a torch (which we as the TV audience unfortunately do not see).

The strange title of this episode comes from the sequence when Arya Stark encounters Jaqen on the road.  Jaqen of course was the one who made it possible for her and her friends to escape Harrenhal in the previous episode.  However, as he will return to his place in Braavos, he endorses to Arya that if she wants to find him, she can simply tell any person from Braavos the words "valar morghulis", and they would get her in touch with him.  Before he leaves, Jaqen says that he is no more.  Then, his face mysteriously changes features, and he walks away.

Back in Winterfell, Theon Greyjoy was advised by the old man Luwin that he should go out already and join the Night Watch.  However in his pride, Theon attempts to pep talk his "troops". In response, his men had him knocked down from his pedestal and taken away.  And when Luwin attempts to help, the old man was stabbed in the abdomen.  After this, Winterfell was ransacked and abandoned.  Much later, the youngest Stark boys and their protectors come out and see the ruin.  They still catch Luwin alive, but he requests Osha to finish him off mercifully.

We go to Qarth where Danaeryn and Der Joram seek for a way to enter the House of the Undying.  The Khaleesi was mysteriously able to enter despite the absence of a door.  While she was exploring inside, she was even tempted by the vision of her dead husband Khal Drogo, as well as her similarly dead stillborn child, both very alive.  She persists in her quest of her dragons though until she locates them chained in one of the rooms.  Multiple copies of her "host" Pyat Pree appear and also attempt to chain her.  However, she tells her dragons to breath fire and fortunately they were able to come up with enough fire to burn Pyat Pree up until he dies. Emboldened when she got her dragons back, she confronts Xaro who was now seen to be sleeping with one of Danaerys's ladies-in-waiting. She gains access to Xaro's vault, which turned out empty, so she decides to imprison both Xaro and her disloyal maid in the empty vault for the rest of their lives.  They ransack Xaro's house of its treasure before they leave Qarth.

Finally, we see Jon Snow in the interminable snowy lands.  For show, his elder colleague and fellow prisoner Qhorin sacrifices himself for Jon to kill, in order for Jon to gain the confidence of the Wildlings.  In another part of the white wilderness, Jon's chubby friend Sam and two other members of the Nights Watch hear a warning horn while they were on duty.  Sam could not run as fast as the others so he had no choice but to hide behind a big rock.  What appears from the mists of the snow was a huge army of white zombies led by a Jack Frost-like old man riding a zombie horse.  That eerie scene was the final scene of Season Two.

BEST EPISODE ENDING:  The birth of the Melissandre's demon baby in Episode 4.  In Season 1, we got surprised at the end of each episode with some shocking event. In Season 1, the endings of Episodes 1, 7, 9 and 10 are unforgettable to this day.  The quiet appearance of the White Walkers in Episode 10 cannot hold a candle to the Season 1 ending scene of the fiery birth of Danaerys' dragons.

My runner-up for favorite character of the season were both associated with Arya Stark: Tywin Lannister and Jaqen.  I look forward to future episodes where Arya will once again cross paths with these two characters.

Of the new characters, the most interesting ones are the females:  Margaery, Melissandre, Talisa, Brienne and Ygritte.  Too bad they were just practically cursorily introduced in Season 2, just suggesting how much more their characters will figure in future political maneuverings among the men fighting for the Iron Throne.  We were just given a taste of who they are now, it shall certainly be very exciting to follow their stories in the seasons to come.

Overall, Season 2 is less engaging than Season 1.  Season 1 really set a very high standard. Season 2 seemed to have just come and gone without any great memorable moments like Season 1 did consistently.  I will still be following Season 3, if only to see more of the Khaleesi and her dragons if they will reach Kings Landing or not.  Her Qarth scenes are the most intriguing and magical of all the story lines going on in Season 2.  I have now also invested enough time to care about how the various members of the Stark and Lannister families will fare in future episodes.  Cannot wait for April 2013 when the third season will finally be unveiled.
Posted by Fred Said at 7:21 AM