"The Phantom of the Opera" in Manila: Fantastic Stage Design, Fantastic Christine!

It took more than 25 years before Andrew Lloyd Webber's "Phantom of the Opera"was finally formally staged in the Philippines.  I had already seen this classic musical live on Broadway at the Majestic Theater, as a film adaptation starring Gerald Butler andEmmy Rossum, and just last year, the 25th Anniversary Concert at the Royal Albert Hall.  I know this play and its music very well I think. Yet I still felt compelled to watch this production because I am very curious on how they could possibly bring the show to life in a local theater such as the Cultural Center of the Philippines, more than anything else. 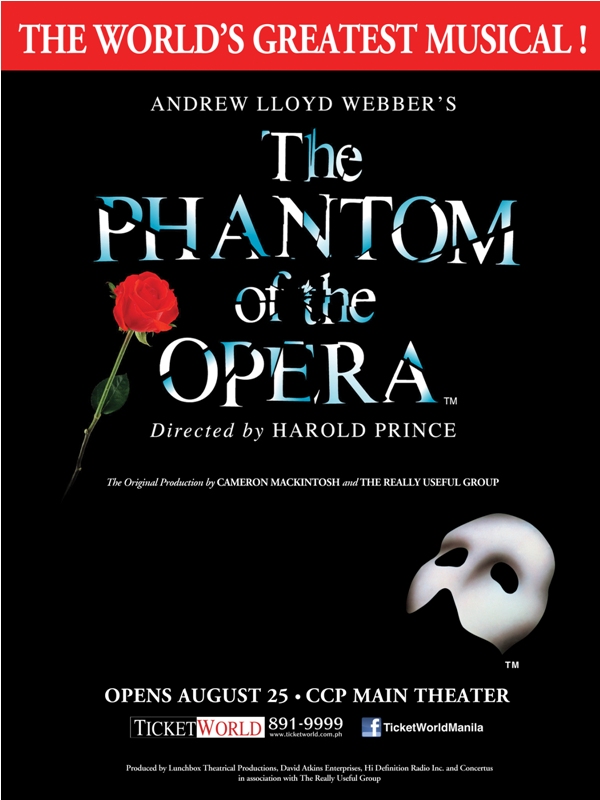 The story is already very well known.  Christine Daae breaks out as the up and coming star of the Opera Populaire, under the tutelage of a mysterious "Angel of Music."  Her mentor reveals himself to be a masked man who had built a labyrinthine underground lair in which he hides and creates his musical opuses.  When Christine accepts the romantic advances of Raoul, the Vicomte de Chagny and her childhood friend, the Phantom lets hell break loose in the Opera House.  Christine reaches a point of no return, and has to choose whether her heart belonged to the Phantom or Raoul.

The cast in this international tour is uniformly amazing.  Jonathan Roxmouth played an excellently dramatic Phantom.  His singing voice was big and strong when it needed to be, and soft and pleading when it needed to be.  There were some big notes that wavered at the start, particularly noticed in his solo aria "Music of the Night."  Not sure if those were microphone problems only though, because in general the voice was solid.  However, he still managed to pull things together and give a grand finish to all his songs. Last night, it was the alternate David Schlacter (not Anthony Dowling who did the press conference) who played the noble and dashing Raoul.  His performance in his featured song "All I Ask of You" with Christine was excellent, though he admittedly seemed wanting for a little more stage presence.

For me, it was the singer/actress who perfectly portrayed and sang the challenging role ofChristine Daae who gave the best performance of the night. It turns out that she was the alternate Emilie Lynn of the USA who played Christine last night (not Claire Lyon who did the press conference). In any case, all of Christine's classic songs were sung with effortless ease and heartfelt drama -- from "Think of Me," "Angel of Music," "All I Ask of You,"  "Wishing You Were Somehow Here Again," and "Point of No Return" -- all so beautifully rendered.  That exquisite soprano voice of hers singing the word "SOAR" at the rooftop with Raoul did just that. I really could not believe that Ms. Lynn was only the alternate as she definitely delivered a STAR performance!  I wonder what Ms. Lyon could still do to top how the superbly sterling Ms. Lynn portrayed Christine.

As for the supporting characters, I give special mention to the following.  Andrea Creighton plays brassy resident soprano Carlotta solidly with much humor.  My favorite Carlotta moment, the big note at the end of the song "Prima Donna," was delivered flawlessly! Rebecca Spence on the other hand played the severe ballet headmistressMrs. Giry with requisite dread and seriousness.  The guy who played Carlotta's consortUbaldo Piangi had excellent vocals as well as good comedic timing.  I was hoping the one we saw was Pinoy tenor Dondi Ong, but it was hard to see his face well because of the heavy darkening make-up.  It turns out though that Piangi was played by Thabiso Masamene that night.

I have to say something more about the awesome production design.  It was said that P15 million budget had been spent to bring the “jaw-dropping scenery and breathtaking special effects” to CCP.  I was most curious to see how they will recreate the subterranean candle-lit world of the Phantom which needed a boat to navigate through.  It was the most memorable scene for me when I watched the Broadway show.  It took some time to set the stage up as the first few lines of the "Phantom of the Opera" song was being sung, the stage was bare with only stage smoke.  However when the "candles" started to appear and the gliding boat...the whole number was dreamlike.  Really amazing how they pulled this illusion off!

In addition, it was also great to see the elaborate Hannibal production in the beginning of the show complete with the life-size elephant, the grand Masquerade ball with the grand staircase and the myriad of colorful sparkling costumes, and the whole finale confrontation scene of the three leads in the climax up to the final disappearing act of the Phantom when he was uncovered by Meg Giry at the end.  The audience gasped audibly in each of these stage spectacles.  The tour version of the Grand Chandelier, as much a star of the show as the actors, was indeed huge and ominous.  However, I thought it did not "crash" very well on this night we watched.  The timing seemed off and the "falling" seemed too slow, thus the audience response was thus rather tentative.

Overall, this tour production of the Phantom was executed and staged very well.  The tickets may have been expensive, but the magical production design and wonderful special effects is well worth the steep price of admission.  While I am pretty sure a full Filipino cast could have pulled off the singing and performing parts, but the main highlight of this show is the grandiose world-class sets and ornate costumes which could not have been possible (or financially sound) for a local production.  I must say that of the other international touring musicals we have seen at the CCP Main Theater lately, namely "Cats" and "Mamma Mia," "Phantom of the Opera" is the best and grandest of them all!