The Cranberries Live in Manila - My Concert Review and Videos! 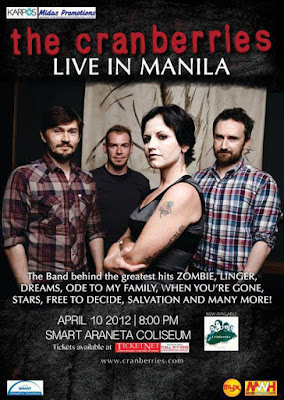 There are three concerts scheduled one after each other this week at the Araneta Coliseum.  April 10 would be The Cranberries, April 11 would be LMFAO and April 12 would be The Stylistics, more to come in the weeks to come.  Gone are the days when concerts would be special events that fans would save up for.  Now these foreign artists come so regularly you have to choose which to go watch.

Truth to tell, I was not really thinking about watching The Cranberries until my Stateside cousin Marv talked about it, so now I have a companion.  Now, I came by the tickets in an entirely fortuitous way.  The night before the concert, I came across this raffle by Astroplus for a couple of Lower Box tickets on Facebook.  I joined, and the next morning, I read that I won!  On our way to Araneta, the Astroplus girl Charm called and told me that the tickets have been upgraded to Patron!  Of all the years I have been watching concerts (and my regular readers know how many), this is the FIRST TIME I have watched anything from the Patron section of the Araneta.

The concert started at about 9 pm already.  The Cranberries, led by their front woman Dolores O'Riordan, fired a one-two punch right off the bat as they opened their show with "Dreams" and "Linger."  I know some people who could have already gone home satisfied after that opening salvo!  She would then sing all of the hits that I know them for:  "Animal Instinct," "Just My Imagination," "Ode to My Family," "When You're Gone," "Free to Decide" and of course, their biggest hit here "Zombie", which closed out their regular set.  Interspersed with the hits are some unfamiliar songs which I guess are from their new album.  She sang two more new songs in their encore, and finally ended the whole show with "Salvation."

I did not expect Dolores O'Riordan to be such a rock goddess live!  Their hits (like "Dreams" and "Linger") are more on the soft side, so I did not her to rock so hard, and she DID!  She was tireless and her voice remained strong despite all the energetic wailing and screaming she had to do.  She was amazing, to say the least, to the very end as you can hear on her last song "Salvation."  There are times when I thought she may not be hearing herself as she went off-key.  But then again, those are their unfamiliar songs, so I don't really know the actual tune.  And her wild dance moves, wow!  Her band was also smokin' as they banged their guitars and drums. The lone female back-up singer was very effective support with her calming voice helping Dolores with the plaintive Irish chanting over the din.

Security was lax, and people could actually all go forward and stand nearer the stage.  I often see that occurrence in the Patron area from the higher sections, but it was actually fun to be in the midst of it all.  The Patron area felt like a mosh-pit with all the standing and dancing fans.   Talking about the fans, I did not expect the Cranberries to have so many devoted local fans. The girls beside us were singing all the songs, even the unfamiliar ones.  I was also surprised that the sound quality was not really that good in the Patron area.  My ears went numb with the volume of the amplifier there.  I could not hear the audience singing along too much, as I did in other concerts from the higher seat areas.  On my videos though, the sound and the singing along could all be heard very well, much better than it was on the floor.  Overall, another satisfying concert experience!