Back 2 Back Ultimate Concert: Taylor Dayne and Edwin McCain at the Arena 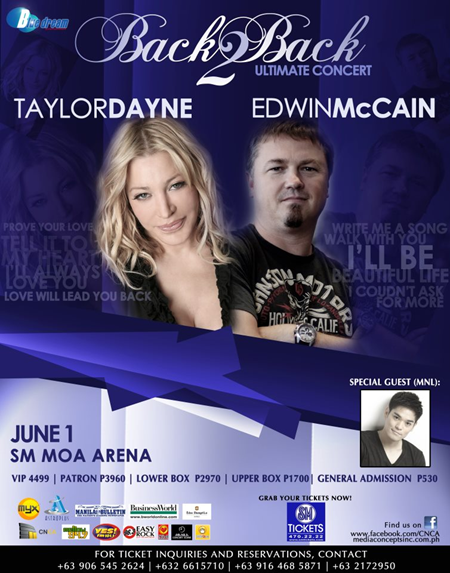 I did not really plan to watch this concert at first.  It was being staged at the new SM-Mall of Asia Arena, only the second concert there after Lady Gaga last month.  The ticket prices were quite high considering that this was a nostalgia concert.  In the last two weeks though, we spotted a Groupon deal selling tickets for up to 75% off.  Because of this big discount, we opted not only to buy tickets, but to buy VIP section tickets for our first concert experience at the Arena!

The seats at the Arena filled up slowly that night.  Actually the front acts were as diverse as the main artists.  The first front act was a guy named Thor who sang two pop songs.  He's got a pretty good voice, especially in his cover of Brian McKnight's "Back to One."  The second front act was a local band whose name I failed to catch or they did not introduce themselves.  The lead singer / guitarist sang very well too.  Their original Pilipino recordings were also quite catchy.  These two acts filled up the first hour.

Edwin McCain came in at about 9pm already.  I only knew him cursorily because of his two pop hits. I do not even know how he looked like till now.  I have not heard any other songs of his till tonight. When he came out playing his guitar and singing a beautiful ballad called "Walk with Me," we were immediately put at ease.  This WGWG had a great voice which was capable of so much more than what his hits showed.  He looked all-American, somewhat like a heftier present-day Leo diCaprio crossed with Jeremy Renner.  He just wore a grey t-shirt and blue jeans, like the typical singer-songwriter type of performer.

His second song was "I Could Not Ask for More"  which was his Top 40 hit from the 1999 movie "Message in a Bottle".  This was followed by unfamiliar but interestingly varied songs like "Shooting Star" (which he wrote for his mother-in-law), "Sober" (which he wrote for his talented saxophonist band mate Craig Shields), "Love TKO" (his favorite Motown song of all time), and another guitar ballad "I've Seen a Love" (this is really his forte).  "Love TKO" was the only song he sang without a guitar but with so much soul, and he even went down the stage and sang beside us practically in the center aisle of the VIP Section.  Predictably, he ended his regular set with his biggest hit, a #5 song from 1998, "I'll Be."  He even invited the audience to sing along with him before he ended the song.  For his encore numbers, he sang covers of hits of other artists, "In Your Eyes" (of Peter Gabriel) and "Crazy" (of Seal).  This guy was certainly a pleasant surprise as a versatile performer.  Enjoyed his set very much.

The excitement that was building up for Ms. Taylor Dayne to come out after Edwin was quashed when it was announced that self-proclaimed "Prince of Pinoy R&B" Jay-R would be singing a set too.  I have to say this set was excruciating for me since he came off like a second-rate, trying-hard Gary V. even at this stage in his career. His performance was so amateurish that my wife thought he was just a new artist.

Anyway, it was already past 1030 and time for the 80s dance diva herself, Ms. Taylor Dayne! Her stage name is certainly sounds better than her real name, Leslie Wunderman.  But wonderful she really was with that strong voice that belied her age (she turned 50 this year!).  She came out in a short shiny greenish dress to her hit "With Every Beat of My Heart", which she mixed with a new song of hers I did not get the title to.  Her next number was already her #3 hit ballad "I'll Always Love You," in which she injected so many runs that it sounded like a different song at certain points.  She then segued into three more dance hits:  "I'll Wait," "I'll Be Your Shelter," then "Prove Your Love."  Interesting to note there was this one big fan of hers sitting in the very front row who was really dancing frenetically to all her songs.  By the time it was "Prove Your Love", he could not contain himself anymore and took to dancing in the center aisle!

After that salvo of dance music, Ms. Dayne cooled it down with two quiet ballads.  The first was "Soon As My Heart Breaks" (VIDEO) which I had not heard before.  However, the simplicity of the style she sang it appealed to me.  She can still rein in the power and the runs after all.  She followed that up with the soaring and powerful "Send Me A Lover" (VIDEO). She stepped up the tempo again with her cover of the Barry White classic "Can't Get Enough of Your Love" (VIDEO).  Too bad the crowd is not really rising up to dance with her (and her rabid fan in the front row).  She left the stage after that song for a while, only to come out again with her debut hit "Tell It to My Heart".  At least with this song, a lot more people stood up to dance and approach the stage.

When she was saying her goodbyes and introducing her #1 hit "Love Will Lead You Back", that is when the audience actually filled up the middle aisle of the VIP section to train their cameras on her.  That was her last song.  She seemed happy, but I bet she was disappointed that most people basically stayed sitting down through her dance hits.  I wonder why?  Ms. Dayne really tried her best to amp up the dancing energy but to little avail.  Maybe her Filipino fans were there more for her ballads?  Or maybe it was already too late in the night and the 80s babies were all too tired already as it was way past their bedtimes?