"Forbidden Broadway" is a satirical show-tunes revue conceptualized and written by Gabe Allessandrini.  It made its debut Off-Broadway back in 1982, and has since had several incarnations, updated with spoofs of newer shows. This is a unique show with only four actors, two male (OJ Mariano and Lorenz Martinez), two female (Liezl Batucan and Caisa Borromeo) playing multiple roles.  These four talents have to give life to hilarious parodies of the biggest Broadway hits and the brightest of Broadway stars by not only verbal humor, but more importantly physically and aurally. 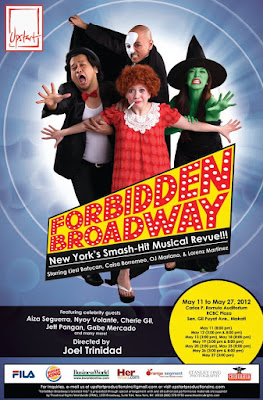 The spoof of "Chicago" centered on the exaggeratedly slinky Bob Fosse jazzy dance moves. The "Annie" (Liezl) spoof was simple yet funny.  The song starts "I'm 30 years old...  tomorrow!" and the rest is just as hilarious.  The "West Side Story" spoof featured a battle-royale between Latina queens Chita Rivera (Liezl) vs. Rita Moreno (Caisa), both of whom played the feisty Anita.  There was a "tribute" to Stephen Sondheim and his pretentious musicals ("Sunday in the Park with George," "Sweeney Todd" and "Into the Woods")  and complicated  lyrics (which was highlighted by inviting the audience to sing along with the lyrics on the projector screen then further speeding up the tempo).

The spoof of Ms. Carol Channing (Liezl) made fun of how she kept on starring in only "Hello Dolly" all these years.  The spoof of Mr. Mandy Patinkin (Lorenz) made fun of the intense way he sings and the cover photo of his album "Dance Casually."  The "Wicked" spoof featured Caisa and her amazing vocal strength which she displayed in her spoof of Idina Menzel as the green witch Elphaba singing "Defying Gravity".

The "Les Miserables" segment was multi-episodic. The fantastic spoof of "I Dreamed a Dream" by Liezl as Fantine, lamenting about miserable musicals with extreme angst, where an actress would sing one song and then die.  The spoof of "Bring Him Home" ("God﻿ it's high this song's too high, goodness me change the key. bring it down. Bring it down. It's too high.") featured special guest star Gabe Mercado.  I call myself a fan of Philippine musical theater but I am embarrassed that although he looked familiar, I did not recognize Mr. Mercado by name nor recall where else I have seen him before.  Much later I realized he was the guy in the Yakult "Ok ka ba tiyan?" commercials.

After a 15-minute Intermission, the second act began with a debate on vocal technique between the suave Phantom of the Opera (OJ) with his trusty head microphone vs. the naturally rich and brassy-voiced Ethel Merman (Caisa). The very funny spoof of Ms. Liza Minnelli (Liezl) focused on her lisp and her cocaine-induced hyperactivity.  I found the spoof of another Les Miz hit "On My Own" entitled "On My Phone" by Caisa to be memorably hilarious.  I can just imagine Ms. Lea Salonga possibly spoofing this her audition song if she was to be the guest star artist.

The "Rent" segment is especially straightforwardly frank as it declared that "'Rent is Spent," saying how this musical used to be so big, but now is hopelessly dated.  I loved it! The Barbra Streisand segment spoofed her "Back to Broadway" album.  Liezl was a powerhouse in this number, effectively mimicking the unique vocal inflections of old Babs. The other musicals spoofed in Act Two were "Cats," "Fiddler on the Roof," "Spam-A-Lot," "Mamma Mia," "Hairspray" and "The Chorus Line."  Cameron Mackintosh (OJ) was also roasted on his "Souvenir Things" (to the tune of "My Favorite Things.")

I laughed out loud at most of the digs at the Broadway shows and stars.  They fly out fast and furious, you'd need more than one watching to get all of them.  You'll still be laughing when another one is being dished out.  This is really naughty and irreverent stuff, but oh so potent and HILARIOUS!  These are not mean-spirited by any means, and obviously written out of adoration of Broadway lore.

Even if you may not be familiar with the musicals and stars being spoofed, I believe you will still have a lot of fun.  My three kids (who were too young to know most of the subjects of the spoofs) were with us last night and they really enjoyed the whole thing! The sheer talent of the cast for physical comedy more than made up for what the kids might have missed with the verbal jokes.

Again, the four Filipino actors in the cast really made this come alive so vibrantly.  Liesl Batucan got the more bombastic solo spots mimicking icons like Minnelli, Channing, Streisand, and succeeded with flying colors.  Caisa Borromeo was very successful in her Menzel and Merman impersonations.  The boys OJ Mariano and Lorenz Martinez were also very funny in the ensemble segments, though their individual solo spots could not really compare to the female solo spots.

The young pianist who provided the live musical accompaniment to the whole show, Mr. Dingdong Fiel, was exceptionally talented!  Kudos to the director Mr. Joel Trinidad for a great job.  This is the first project of Upstart Productions, co-founded by father and son team Noel and Joel Trinidad among others, that I have seen.  Looking forward to seeing more projects from this new theater group.


"Forbidden Broadway" will run at the Carlos P. Romulo Auditorium, RCBC Plaza, Makati for two more weekends in May, up to May 27, 2012.