To tell you the truth, I only went to watch this Snow Patrol concert to hear two of my favorite alternative rock songs sung live!  These are "Chasing Cars" and "Run."  After both of them were sung within the first hour, my concert was already fulfilled!  However, listening to the other songs of this band performed live made me an even bigger admirer of their music. 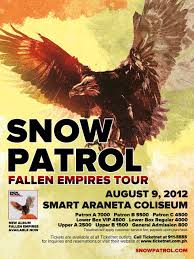 Despite the severe monsoon rains and floods, and the other foreign concerts this week (Smashing Pumpkins the day before, and Tears for Fears the day after), the Araneta last night was alive and jumping for Snow Patrol!  This is after all a current band at the height of its career, not a nostalgia act like the other two.

The voice of lead singer Gary Lightbody was something else.  He was not kidding when he said they were better seen live than heard recorded.  Yes, there were times that the guitar twangs or even Gary's wailing went out of tune but you can disregard those in the scope of the show as a whole. All their songs have that anthemic feel to them.

They started the show with "Hands Open."  The next songs were "Take Back the City," "Crack the Shutters," (familiar but I forgot it was theirs - VIDEO) and "This Isn't Everything You Are."  And then they sang one of my awaited songs, "Run."  That song is really beautiful.  The next songs were "In the End," "New York," "Set Fire to the Third Bar," "Make This Go On Forever" and "Shut Your Eyes." And then they sang my second awaited song, "Chasing Cars" which really brought the house down.  The next songs were "Chocolate," "Called Out in the Dark," "Fallen Empires," and "Open Your Eyes". "You're All I Have" closed out their regular set.  After a brief break, where the audience raucously cried for more, they came out again for their encores numbers, "Life-ning" and finally "Just Say Yes."

The light shows and the video backdrops were awesome to see. You can see that best on the video of "Fallen Empires" and the final song "Just Say Yes" (VIDEO).  I did not know they also did this electronic-sounding upbeat music.

Gary also did not forget to pay his respect to the victims of the current monsoon disaster.  He dedicated the first song of their encore set, the haunting  "Life-ning" to them, and the country as well. He seemed to genuinely in awe of the Filipino spirit.

Too bad though that they did not sing their other hit song, "Signal Fire".  Even if I only knew two songs very well coming in and the heavy rain and flooding I had to drive through on the way home, I do not regret that I watched this concert.  This really makes me want to listen to their CDs and get to know them better.