June 14, 2012, my wife and I caught the first day local showing of the movie version of the hit Broadway show called "Rock of Ages."  I do not know if it was quite the coincidence that the local stage production of "Rock of Ages" by Atlantis also opens this week.  We caught this show right on its opening night at the RCBC Auditorium, June 15, 2012. 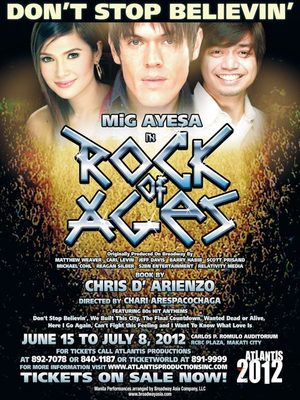 Except for a few plot points, the story of the play was, of course, basically the same as what we saw in the film: Young musician Drew meets young singer Sherrie at the Bourbon Room, located in Sunset Strip of Los Angeles.  This rock establishment, run by Dennis Dupree and his friend (and the play's narrator) Lonnie, was in unfortunate financial straits. To generate much needed funds, Dupree invites rock star Stacee Jaxx, who started his career at the Bourbon Room, to hold a big concert there.  But egocentric Stacee's visit wreaks havoc on the love story of our young couple.  Can Dupree save the Bourbon Room? Can Drew get Sherie back?

My full movie review is posted HERE and HERE.

We could not help but compare this stage musical with the movie we just watched yesterday. The love story of Drew and Sherie is clearly the central focus of the stage version.  The movie version, on the other hand, was all about Tom Cruise as rock icon, Stacee Jaxx, as every other character would all fly beneath his big shadow.  The movie, while it has scenes of sexual, drunken and drugged debauchery, is surprisingly still a more sanitized version of the rowdier stage version, which really crisp, spicy language.  The movie was kind enough to protect Sherrie's innocence and naivete, so unlike the stage Sherrie who was considerably  less prudent. While the stage version was very busy and felt rather disjointed compared to the film, it still had a charm of its own, especially since it was performed live.

The role of Constance the Rolling Stones magazine reporter, while only a bit role in the stage version, was very much expanded in the movie (with Malin Ackerman), and she was even given the song "I Want to Know What Love Is" with Stacee Jaxx on the billiard table.  In the stage version, that seduction song was sung by Jaxx with Sherie in the men's bathroom.  The roles of the Mayor Whitmore and his wife Patricia (Bryan Cranston and Catherine Zeta-Jones) were not in the stage version at all.  The stage characters who wanted to demolish the Bourbon Room were a German father and son, Hertz and Franz Kleinmann, who wanted to build their own Foot Locker store in that space.  I guess bad gay Germans do not really make good movie material nowadays.  The character of bohemian activist Regina was totally not in the film as well.

There were several songs which did not make it to the film at all like "Cum On Feel the Noize," "The Final Countdown," "High Enough," "I Hate Myself for Loving You," "Oh Sherrie," and the very cheesy "The Search is Over." Some songs were sung by different characters in different parts of the story.  Regina sings both "We Built This City"and "We're Not Gonna Take It" as protest songs in the first part of the stage version, but these were sung by Lonnie (Russell Brand) and Mrs. Whitmore (Zeta-Jones) respectively against each other in the latter part of the movie version.  "Hit Me With Your Best Shot" was sung by Franz against his father in Act II of the stage version, but was sung by Mrs. Whitmore and her posse in the first part of the movie version.

So now how did the Filipino stage production do?  I say they did pretty well as far as the stage and the set pieces were concerned, given its budget limitations.  They had neon signs and tv screens to indicate where the scene was set.  Instead of having the girls dancing on poles in the Venus Club, they were dancing on ropes decorated with multi-colored brassieres.   The wigs the characters wore went two ways.  For comedic characters like Dennis and Lonnie, their ugly wigs were fine and even hilarious.  But for the main characters like Drew, Sherrie and Stacee, their ugly wigs were quite distracting to their overall performance.

For Filipino cast, the singing talent is undoubtedly there as always.  I never knew thatNyoy Volante (as Drew) can scream out those big rock anthems!  Unfortunately, he does not really fit the Drew character physically, and his terrible wig does not help. His performance felt better when I was not looking at the stage, and just listening to his awesome voice singing.  Vina Morales was really sexy as Sherrie, in her skimpy outfits that show off her killer abs! I admit that I was initially skeptical about this casting since Vina seemed too old to play Sherrie. However, her bravura performances of "Harden My Heart" and "I Hate Myself for Loving You" were really amazing. Though I did not really feel substantial romantic chemistry between Nyoy and Vina, their soaring duet of "High Enough" was a real showstopper! 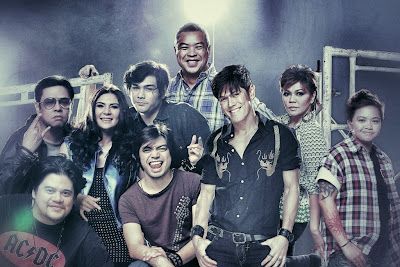 The movie version made the character of Stacee Jaxx larger than life, so I had the biggest expectations about this character.  However in the stage version, Stacee Jaxx was no more than a mere supporting character.  So when MiG Ayesa was playing Stacee Jaxx mostly as a comic fool on stage, the whole performance felt sort of underwhelming.  This was surprising to me because MiG has actually played this role on Broadway already!  His singing was pretty good, but his "Cum on Feel the Noize" did not have the same impact as Tom Cruise's "Pour Some Sugar on Me."  There was also something strange about his hair and make-up that did not feel too right.  I guess I was really expecting too much from MiG, hence some disappointment.

Aiza Seguerra was cute and sassy as Regina, and very very funny as she delivered her lines.  Her singing voice, while very good, can sometimes be drowned out by the band.   And she was also unexpectedly fearless in playing one of the girls of the Venus Club!  You've got to see it to believe it.  Jinky Llamanzares was expectedly good as Justice, the madame of the Venus Club.  Her strong  brassy voice can really stand out from the chorus.  Calvin Millado was just ok as the German dad Hertz, and Bibo Reyes (who looked nothing like Calvin) was no-holds barred in his scene-stealing "not gay, but German" performance as Franz.  Jaimie Wilson was the perfect Dennis Dupree.  He really looked like an aging hippie.  Now, Jett Pangan... that awful wig and his uncharacteristic effeminate mannerisms really made him look like John Sweet Lapuz!  Haha! Remember, this guy was just recently seen as Jekyll and Hyde!  It was a hilarious brave turn for him to play Lonnie.  As expected, their "Can't Fight This Feeling" was a big hit with the audience!

OK, so this 80s kid just had his fill with two versions of "Rock of Ages" both stage and screen.  While the treatment of characters varies, it was really all about the amazing music.  Other generations can call those rock anthems noisy or those power ballads cheesy, but I liked listening to them growing up, and I liked re-living them in "Rock of Ages."  I won't be ashamed to admit that I enjoyed singing along both in the movie house and in the RCBC theater.  Come on now, I am sure you'll be singing right along too!

Congratulations to Director Chari Arespacochaga and the rest of the company ofAtlantis Productions for another fun show!  The language and sensitive scenes make this show for mature audiences only, not for young kids.  "Rock of Ages" runs on weekends up to July 8, 2012 at the RCBC Theater in Makati.  Go catch it and have "nothing but a good time"!