I remember being disappointed when I saw the film version of the Broadway musical"Nine" shown a couple of years back.  The film, a glamour project which featured renowned film stars Daniel Day-Lewis, Nicole Kidman, Sophia Loren, Penelope Cruz and Kate Hudson, seemed too disjointed to be good and even memorable.  I don't remember much of the film frankly.

However, when Atlantis started to promote its own local production of "Nine" with Jett Pangan, surrounded by major actresses like Menchu Lauchengco-Yulo, Cherie Gil, Eula Valdez and others.  I resolved that I need to watch this show and see why this musical won many Tony Awards back in 1982, including Best Musical, Best Original Score (Maury Yeston) and Best Director (Tommy Tune). The film must really have done something wrong, or this musical is simply not film-able -- I needed to know why.

"Nine" is the story of revered Italian film director Guido Contini (Jett Pangan) and the women in his life. Mainly there was his wife Luisa (Menchu Lauchengco-Yulo), his mistress Carla (Carla Guevara-Laforteza) and his star actress Claudia (Eula Valdez).  Peripherally, there was his mother Magdalena (Joy Glorioso), his film producer Liliane(Cherie Gil), and the prostitute who initiated him Saraghina (Ima Castro).  Yanah Laurel plays Stephanie, a scathing film critic who could not stand Contini, while Sitti Navarro plays the Lady of the Spa where this musical is set.

I thought the title "Nine" referred to the number of women who played important roles in his life, but no.  "Nine" was the age when Guido became a man, well sort of, making it the most impressionable and influential age in Guido's growing up.  The nine year old Guido (Ethan Baranda-Paras, son of actress Phoena) actually played an instrumental role in adult Guido's self-discovery and survival in this play's climax.

Jett Pangan is really becoming the go-to guy when the lead is a middle age male character, as he was also cast as the husband in "Next to Normal" and "Jekyll and Hyde". His performance of the rapturous "The Bells of St. Sebastian" and the climactic "I Can't Make this Movie" were very strong vocally and emotionally.

Menchu Lauchengco-Yulo was perfect as the perfect wife, Luisa.  She was very sweet in "My Husband Makes Movies" as she was infuriated in "Be On Your Own."  Ms. Menchu can do no wrong as she gets absorbed into her characters in her every project.

Carla Guevara-Laforteza as Carla, wow!  I can't believe I knew her first as the very sweet Kate Monster. She was very daring indeed as Carla as she sexily slinked on the stage in her fishnet stockings and cavorted with Guido.  Her singing voice was appropriately sultry in her featured song "A Call from the Vatican".

Eula Valdez was a riveting presence onstage as Claudia, and it was quite understandable that she is Contini's muse.  She simply oozed with glamour even as she was only sitting there on her central pedestal.  She was a revelation in her singing the dramatic song"Unusual Way." She nails it and how!

Cherie Gil was a dominating featured character in the first act as Liliane.  Her serio-comic rendition of "Folies Bergere" was flawless and on point performance-wise, a true showstopper. Her very hoarse voice though was precariously on the brink the whole time when she spoke, and especially when she was singing.  I hope she can take care of her instrument for the rest of the run.

Ima Castro was the unexpected choice to play the prostitute Saraghina.  Her vocal prowess was certainly there during her song "Ti Volglio Bene/Be Italian."  However, there is some physical disconnect with the way she looked and the character she was playing, so it was not too convincing.

The stage design is the most elaborate and wondrous I have ever seen for an Atlantis production. The whole RCBC theater stage was converted into a marble spa with multiple pedestals, stairs and doors where the actors performed on its multiple levels.  This is definitely award-winning stage design, in both its look and functionality.  When an actor was performing on the top most tier, it looked absolutely breathtaking.  No words I write can fully capture the majesty of that stage. 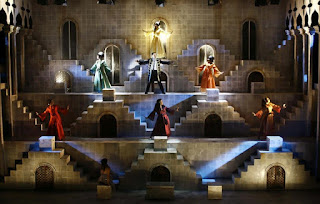 I am glad I did not let my disappointment in the film version stop me from watching this play.  This play is for adults only because of its mature theme. There will be some potentially scandalous scenes for some conservative audiences.  However, overall, it is an excellent production.  It is definitely going to impact the most on the middle age group, who could easily identify with Guido's midlife crisis portrayed.  There is an important life message in there somewhere which each member of the audience would have to figure out for himself.

Congratulations to Director Bobby Garcia and the rest of the Atlantis cast and crew for another thought-provoking and very entertaining show!

Altantis Production of "Nine" will run only on the weekends Fridays to Saturdays from September 21 to October 7, 2012.  Do catch it and be enthralled, not only by its exotic look, but also by its deep introspective message!
Posted by Fred Said at 5:06 PM