After tackling a 110-year old sarswela for its season opener, Tanghalang Pilipino goes all the way to the other extreme of the theater spectrum to give us a contemporary political thriller for its second offering.  Publicity defined "Walang Kukurap" as a "production which blurs the lines between art and life, fiction and reality, as it vivisects the darkest parts of the Filipino soul."  With such a stark description, I had no idea exactly what kind of play I was getting into. 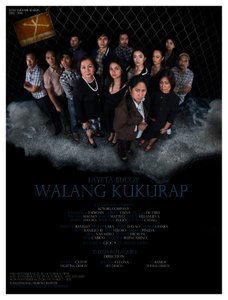 I only knew of playwright Layeta Bucoy recently when she adapted Lino Brocka's movie"Bona" for PETA, as a serio-comic theater piece for Ms. Eugene Domingo.  Now with her exciting script for  "Walang Kukurap," we know that her success with "Bona" was no fluke.  Ms. Bucoy has certainly gone a long way from writing tabloid erotica or ghosts stories, and has now become a playwright to reckon with.

We are presented with what is supposed to be a typical small town in the Philippines. Director Tuxqs Rutaquio calls it a modern-day version of Rizal's San Diego. As the characters play mah-jong in the first act, we immediately know this will not be just an ordinary play about an ordinary town. We will be shocked right away with its frank and graphic violence, not only in the dialog generously peppered with crisp profanity, but more so in the unspeakable action that unfolds.

This tense atmosphere will pervade through the play's two acts and 25 scenes. Within its span of two hours, we will be treated to scenes of bloody torture, mutilation, assassination, murder, as well as multiple scenes of double-crossing, underhanded deals, political gimmickry and intrigue in all its forms.  Is this really how corrupt politics is in a typical small town in our country nowadays?  If Ms. Bucoy wants us to be disturbed, I assure you, you will definitely be disturbed with what you will see in that small intimate space inside the Teatro Huseng Batute of the CCP.  She was not dubbed the "Female Quentin Tarantino of Filipino Theater" for nothing.

The senior cast was composed of actors we have seen before on other plays, movies and tv.  It is the women characters who were the most memorable.

Suzette Ranillo played Cristina, the widow of the beloved ex-mayor who is now running to be vice mayor. It is her character who witnesses the corruption around her and struggles as it starts to corrupt her.  Her acting style and line delivery can be distractingly reminiscent of Ms. Nora Aunor at times.  Her scene with the intense Lou Veloso (who plays her Papang) and another one with brash Peewee O'Hara (as Panchang, the tricycle driver-mom whose son was killed in a brawl) were outstanding!

Sherry Lara plays the proud and wily Mayor's wife Purita, Those scenes of hers as she prepares the statue of the Virgin Mary for the procession showing her fluidly transforming her character as she interacts with her husband and incumbent mayor Molong (Crispin Pineda), and later her brother-in-law Paquito (Paolo Cabanero) was amazing.

Mymy Davao plays the ruthless and opportunistic accountant Melba. She dominates the scene whenever she is onstage with her strong stage presence.  Her scene as she strikes a cruel deal with the young lawyer Vic (Remus Villanueva) was particularly chilling.

The other senior members of the cast are Ced Torrecarion (who plays Christina's cousin and town gambling lord Alex) and Ding Navasero (who plays the rich and influential trapo Santiago, Sr.)  On the night I watched, Mr. Navasero majorly flubbed his climactic campaign speech in the final act, which considerably diminished the final impact.  Ironically, this was just after he had a great scene with his son (Nicolo Magno) talking about how he had manipulated the town's politicians to his benefit.

The younger cast members were mostly members of the TP Actors Company,  who regularly undergo an intensive training program under the TP.  Who knows, one or all of the young talents who are with TP Actors Company now could be the future Nonie Buencamino, Shamaine Centenera, Allan Paule, Irma Adlawan or John Arcilla, all of whom also owe the honing of their craft to the Actors Company.

Again the more memorable performances from this group were also by females.

Doray Dayao plays Doray, the poor and idealistic mayoralty candidate.  It was surprising to read from her CV that she is just a new Actors Company scholar.  She completely won the audience attention and sympathy as she quixotically rallied against illegal logging and floods. The scenes where she interacts with her SK-chair son Gutierrez (Nar Cabico) were the liveliest in this play. I was jarred to witness this one character who sincerely wanted to do good for the community playing the comic relief in this dark play.

Regina de Vera plays Rhoda, the socialite daughter of Melba, whose life had been molded by the political whims of her mother.  She always kept in character with her sassy and snappy collegiala Taglish lines.  This was whether the scene was funny (like how she defended herself wearing stiletto shoes during her campaign) or dramatic (as in a couple of confrontation scenes with her cousin Marky, played by Marco Viana).

The other TP Actors Company members in this production are:  Jonathan Tadioan (as the Chinese drug lord Lu), Ralph Mateo (as Purita's son Dino), April Joy Inigo (as the singer August) and Jovanni Cadag (as the stuttering Pong).

Congratulations to Tanghalang Pilipino, Layeta Bucoy and Tuxqs Rutaquio for bringing us this bold and shocking piece of theater.   In her notes, Ms. Bucoy points out that "Walang Kukurap" "simply aims to unsettle," not exactly to lead or inspire.  "Walang Kukurap" will certainly jolt us to the disgusting corrupt realities of our current local political systems.  As we are disturbed by what we see on stage, we are being challenged to decide on what to do next to correct the situation.  It is then up to us to take the challenge and do what is needed to bring our beloved country back onto the straight path, and we should not blink in doing so.